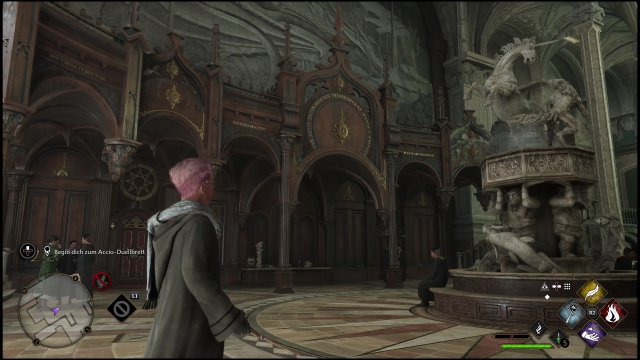 Witchcraft and Wizardry in the 19th Century

Hogwarts Legacy is set in the late 19th century Wizarding World. We are not yet talking about the big names in the Harry Potter series such as Grindelwald, Dumbledore, Voldemort and Co., but of course it is not entirely without a dark threat even at this point in time. Sinister wizards and goblin rebels, led by the pointy-eared villain Ranrok, make life difficult for the wizards and witches. Players begin as adult fifth grader latecomers at the School of Witchcraft and Wizardry. I’m not allowed to tell you more about the story at this point, which will certainly have one or two twists in store.

The Harry Potter creator JK Rowling has repeatedly attracted attention in recent years with statements that can be classified as transphobic.

These repeatedly led to controversy in the Harry Potter community. If you want to know more about it, you can, for exampleheremore information.

Rowling is not involved in the development of Hogwarts Legacy – but benefits indirectly from profits from the umbrella brand through trademark rights.

Instead, the extensive character editor was shown, in which detailed, individual characters can be created with the usual tools, from face customization to hairstyles. As a pointer in the direction of JKRowling, who was not involved in the content of Hogwarts Legacy, the players can move freely between genders, among other things. Adjusting the voice color is a bit amusing, which as usual has a male and a female variant. However, this can be varied in different pitches, which happens by means of pitch shifting. It works rather mediocre – in the audition session, my witch’s voice sometimes sounded a bit like the speech modulation of a text-to-speech device, since the frequencies were artificially adjusted.

Good technique with attention to detail

Basically, the technology of Hogwarts Legacy makes a very neat impression at first. Although I wasn’t allowed to switch from the 30 FPS quality mode to my preferred performance mode, the picture was convincing with its crisp 4K display, good visibility in the areas around the school castle and powerful magic effects in combat , including shimmering rays of light and flying debris. Soft lighting moods at sunset, training rooms illuminated by flickering lanterns or the greenhouse flooded with light bring the world of magicians to life in a technically impressive way. By the way, there is so much to smash, collect and discover everywhere, from vases to chests.

Very nice: Hogwarts and its interior are hit really well.

When playing the game, I was allowed to fly around Hogwarts on a broomstick, then explore the library and the greenhouse, and after a short duel training, finally tackle a mission later in the story, in which my character and the Hufflepuff student Poppy Sweeting fight the dark ones uncovers machinations of poachers in the forbidden forest. It is striking how much love there is in the Hogwarts detail. Be it the turrets and halls of the castle, the Quidditch field, the cloaks or the creatures that you encounter around the school. For example, a group of menacing centaurs appear in the forest, while a little later you discover the dragon fighting ring of the nasty poachers. The developers translated the minutis template into a virtual world where everything is exactly where it should be. This is also reflected in the students’ outfits, which put the magical 19th century in the limelight. The successful facade only very rarely breaks – for example when you follow one of the countless NPCs in the library who carries around a huge cage, only to find that he is simply running in circles. But that’s trifle, because the overall impression of the virtual Hogwarts is incredibly convincing in the first few minutes, especially when you witness, for example, when a house spirit annoys a student on the way to the classroom.

And Hogwarts Legacy is also quite competent in terms of play. Although I struggled a bit with the input lag of the 30FPS in performance mode in my try-out session, mechanically the fight cuts a fine figure. In addition to the standard magic on RW, learned magic, which in our preview version ranged from the simple attraction magic “Accio” to the unforgivable curse “Crucio”, can be distributed to the four action buttons on the controller. There are four switchable assignments here, so that up to 16 spells can be held up. The combination of R2 and the respective key is then used to perform magic – and that makes a good impression. 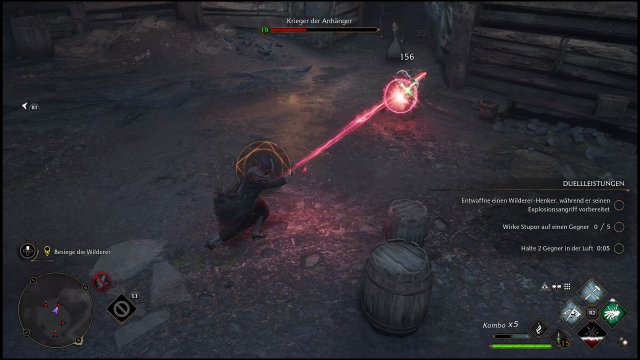 Effective: In the magic fight, things really get down to business.

In magical combat, things really get down to business. Enemies can be thrown into the air, set on fire, disarmed or stunned. The areas are often linked – so I first throw an opponent into the air, pull him towards me and then give him a fire spell that sends him burning to the ground. This not only looks massive, but also feels wonderfully crisp. Each spell has a cool-down timer that limits its use, and some of the enemies have resistances that can be overridden with a spell of the appropriate color code.

During the fight against the poachers, especially in the final arena with a nasty dark magician, a dynamic, brute battle broke out, which definitely made me want more action of this kind. In terms of content, however, I do wonder why I was allowed to use the torture magic Crucio against the goblins and people who stood in my way. What moral implications await my fifth grader here, however, was not answered to me. Only the test will show whether Avada Kedavra and Co. have an influence on my character, which I can develop using a Talet tree. 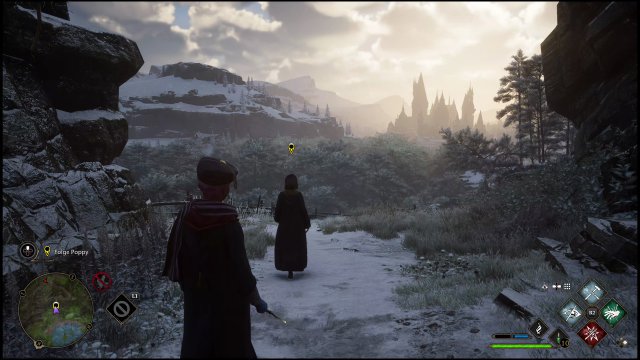 Beautiful view: Great lighting moods and a great view characterize the picture in the area around the castle.

In addition to the open fight, there were also a few small sneaking passages on the forest excursion with obstacles, in which I was able to sneak up on the guards using invisibility magic and then render them harmless using a petrification spell. In addition, the mission was garnished with a crime scene investigation, in which evidence and traces had to be found in an area. It’s been standard in open-world adventures of this type since The Witcher 3, but it’s properly staged here. The conversations with other characters, which appear somewhat stiff at the waist, are also staged in a typical form and offered few surprises during the introductory session.

I was also able to get a first glimpse of the equipment system with cloaks and the like, which are also reminiscent of classic action role-playing games with their value improvements and bonuses. Of course, the extent of loot, crafting and Co. and the effects on the gameplay could not yet be assessed.