Doing virtual laundry with strangers in Roblox is thrilling and distressing 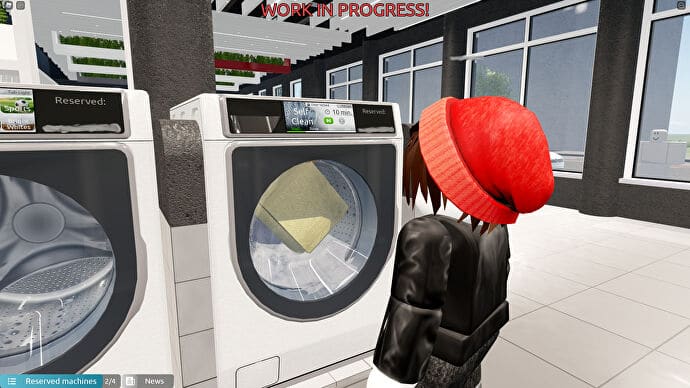 Today I visited a virtual launderette to do my virtual laundry in Roblox, lining up alongside online strangers who were also washing their virtuasmalls. After loading the machine, filling my powder, and carefully selecting then starting my cycle, I watched through the door for 12 minutes as my washing sloshed and spun. And then I watched another player’s washing in disgust. Visiting this laundry simulation has made me realize I have strong opinions on how other people run their imaginary washes. You wouldn’t believe the laundry crimes I’ve seen.

As lawless and predatory as Roblox is (see the People Make Games docu with former RPS man Quinns for more on that), it is an astonishing online space filled with such a wide range of strange and wonderful things. Not many games let you visit a virtual launderette to simulate laundry with other players but you can do that in Washware. You can play the current prototype version for free in Roblox now. I am delighted that it exists.

Washware starts you in your messy apartment (temporarily spread across the town square), surrounded by dirty laundry. Fill your pockets with clothes and soft furnishings, pick each garment up individually, and head to the launderette. Pick your machine (front and top loaders available), fill it with a load, select your detergent and optional softener (even as one of those millenials killing fabric softener, here I do chuck in a glug to admire the pastel goop), pick your cycle, then sit and watch it go through the full wash, spin, and rinse. Then you can put it in the dryer, and then you can put it in your wardrobe. Here’s a trimmed-down video of the pleasing process of starting a wash:

See also  Ubisoft throws game from the store – without compensation

I wish it had more sounds, and louder. That real clutter, slosh, rattle, and rumble.

Wash cycles take about 10-14 minutes in real time, so you have ages to watch your own laundry or see what other players are doing. Oh, other people’s washes are distressing. Such vandalism that they might as well throw a brick in.

I’ve seen sofa cushions thrown in alongside flip-flops and underwear. I witnessed one player running two machines full of towels and sofa cushions on a simple rinse & spin cycle and god, I could almost smell those sodden towels. And I gasped aloud when I saw a full load of mixed colors on through the machine’s self-clean cycle. Innumerable laundry crimes committed casually by smiling Legomen.

Are these players gleefully committing laundry crimes in the same way that doing murder in video games doesn’t mean you’d actually kill someone? Did they intentionally wash their towels so badly because they’d never run this wash for real? Were these the laundry equivalent of edgy tales about murdermen, the delicate No Russian? Or was this perhaps trolling? Some point out, “Alice, Roblox is primarily a kids’ game so they might probably know nothing of correct laundry loads and this is just make-believe with 3D graphics” but no, I’m certain they’re doing it on purpose.

On the bright side, I have learned about modern laundry technology. As a renter, I’m at the mercy of whatever battered old appliances my landlords had kicking about their garage, and have not even had a dryer in 20-odd years. Apparently now you can get dryers with a high-heat bug-blasting anti-allergy mode? What times we live in! I also took the rare opportunity to play with the laundrette’s American-style top-loading washers, which seem worse than front-loaders? But now I know, because I’ve played a Roblox simulation.

The developer, “BuilderAtWork” plans future additions including washing lines, drying racks, and even other appliances like air conditioners and dishwashers. By god, I have opinions on the correct way to load a dishwasher.

Washware came to my attention via Terry’s Free Game of the Week, a good blog run by Super Hexagon and VVVVVV fella Terry Cavanagh. He’s got into developing for Roblox too, making a game about climbing a giant man.

Disclosure: Terry Cavanagh is a pal, and married to a great pal of mine. I have likely seen his IRL washing at some point, though I never watched it. That would be weird. Don’t watch the washing of people you know. Save that for strangers online.