The Lord Of The Rings: Gollum may miss a precious opportunity 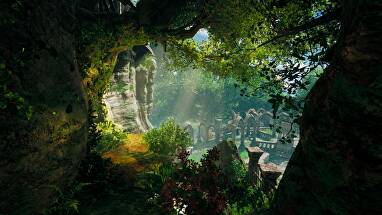 I recently got a hands-off look at The Lord Of The Rings: Gollum, Daedalic’s upcoming third-person stealth game which sees Mr Precious himself take center stage. Flanked by devs and squidged between other journos, I saw two short demos, one right at the start of his adventure, and the other much further in. I saw him clamber around Mordor (I think; it was mountainous at the very least) and then stealth around an Elven king’s abode. It was… fine. Yes, I saw an early build and things could change, but I left that booth feeling a bit underwhelmed, in all honesty.

The earliest portions of the demo saw Gollum take part in a classic platforming tutorial. He jumped across large gaps, sprung onto ledges, shimmied, and dropped down. Vines helped him clamber up walls and acted as springboards for more parkour. While we couldn’t get our mitts on the controllers, it seemed like Gollum handled well! And most importantly he moved like Gollum, in his wiry, scrabbly way.

Later, Gollum has an internal battle with his alter-ego Smeagol: does he eat a beetle or let it go? The beetle is mercilessly consumed, much to Gollum’s pleasure. This particular choice will likely not have a lot of impact on the game, other than maybe some shell in his stool. We were told that Beetle Gate acts as an introduction to Gollum’s eternal tug-of-war with Smeagol, and that there will be more complex decisions later down the line with lasting story consequences. They wouldn’t expand on this for obvious reasons, but did say that Gollum will make some friends along the way and that his decisions will affect them too.

It’s hard to pass judgment on the game’s choice system, especially as I’ve only seen one (1) beetle slide down a gullet. But I really do hope that Gollum’s future decisions aren’t always so black and white. Beetle Gate struck me as an almost reductionist way of presenting Gollum’s internal struggle as a simplistic bad versus good scenario. Here’s hoping that, come full release, these decisions and their consequences evolve to better reflect his character and the surrounding story.

And thanks to the Tolkien seal of approval, it’s a story that Daedalic have significant freedom over. I asked why they’d chosen Gollum out of like, Aragorn or Legolas or the orc that belts, “Looks like meat’s BACK ON THE MENU BOYS!” And it came down to Gollum’s stubby little fingers, and the many different pies that house them. He’s a somewhat neutral party with a wily side, who lurks in the shadows and gleans of information. They felt that his universality would nestle you right in the thick of a Middle Earth that’s not been fully explored by the books, like that time when Frodo and the boys petitioned against building works at Hobbiton. It’s a genuinely exciting prospect for fans hungry for fresh tales that might finally fill in some gaps.

Continuing the lore-spree, we jumped forward in time and entered a wonderfully realized Elven king’s palace, with lots of telling homeware dotted about for faithful LOTR fans. Ornate glass decoration lined long wooden tables and chandeliers dangled from a light, airy ceiling. After an environmental puzzle which involved climbing up the rafters, shuffling on ledges, and swinging off ropes, two wizardy blocks (major characters) entered and had a chat. It was up to Gollum to evade their gaze and listen for lore purposes. As they paced around and Gollum scampered and they paced around and Gollum scampered and they paced around… boredom set in. After what seemed like an age, the two lads separated and eventually found our poor scamp. A “Game Over” screen popped up, which meant replaying the entire scenario again.

Granted, the devs did say that much of the story would be delivered to you on the move, as opposed to situations – like with the wizardy blokes – where you’re forced to sit tight. What worried me was Gollum’s lack of stealth maneuvers, like snapping into cover, or hopping over benches, or peering out of cracks. We only saw him awkwardly position himself behind Elven homeware, with his gangly limbs fixed in all-fours.

Gollum does have some powers, though, like “Gollum Vision” which is what you’d imagine: a sweep of the area that highlights threats in red for a bit. We saw him employ this during the wizardy chat, and another bit where he dipped into some bushes and evaded some orcs. The devs also showed him pounce on one of these orcs and knock them out, which then led to a brief chase sequence where Gollum hopped over a ledge and the remaining orc quickly lost interest and returned to his post. Apparently, he won’t gain any new powers or stealth abilities as you progress as it would go against the Tolkien licence. It makes sense. I mean, you can’t have Gollum growing wings or transforming into Machamp and delivering haymakers without angering fans, can you? But what I saw was generic stealthing that didn’t showcase his unique skillset; Legolas could’ve filled in for Gollum and the game would’ve ticked along nicely.

Perhaps I’m being harsh, especially as I’ve only seen a small glimpse of an early build. I’m confident The Lord Of The Rings: Gollum will be a treat for LOTR loreheads with its weaving of new, exciting tales, and it’s clear the devs want the game to grip existing fans and newcomers alike. But it could very well lose sight of the opportunity it’s been given. Yes, they’ve placed Gollum at your fingertips, and he may scrabble about on all fours and eat beetles, but he doesn’t seem all that fun to play. And that’s what worries me.