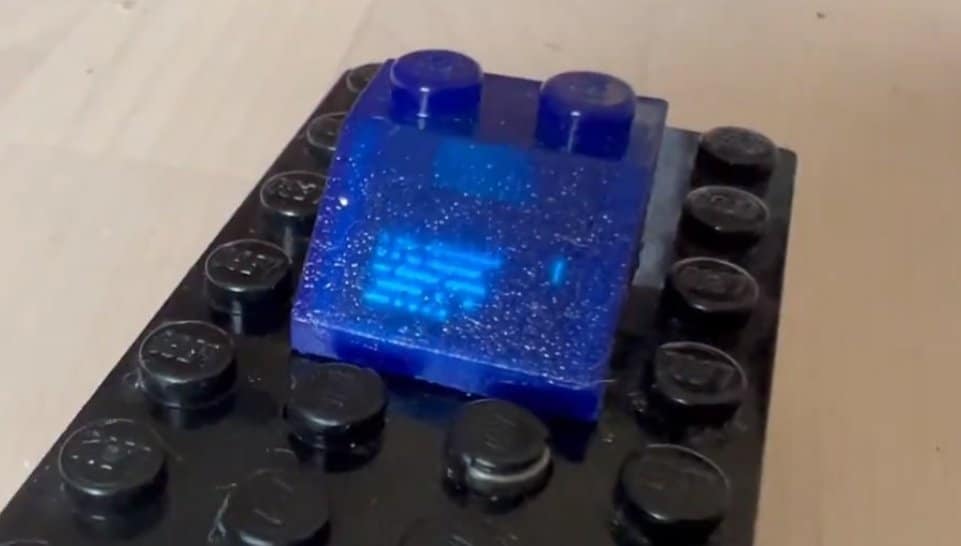 06/12/2022 at 7:15 p.m
from Oliver Jaeger –
A hobbyist named James Brown presented on Twitter a Lego or clamp building block in which he integrated an ARM microcontroller and an OLED display. When power is supplied, luminous overlays can be seen through the transparent stone. Meanwhile, James Brown seems to be making more stones.

The Internet always brings strange, bizarre and interesting gimmicks to light. A few days ago there was something like this again on Twitter, because a hobbyist who goes by the name of James Brown developed a Lego minicomputer. His work is based on 2 x 2 slope bricks from the clamp construction manufacturer, on which images of computer screens and control elements can often be seen.

A Lego brick with a processor and light effects

However, James Brown used a 3D printer for his project, which he used to put together the right form in such a way that both a microcontroller and a small OLED display could fit in it. The microcontroller is a Cortex-M0 processor (STM32F030F4P6) from the manufacturer ARM, with 16 KB flash memory and 4 KB RAM according to James Brown. The inventor used a QT1306P82 with a screen diagonal of 0.42 inches as the OLED display. The connected components were then inserted into the device from the 3D printer.

Also interesting: Not only Corsair can do this: Youtuber builds “the most powerful PC fan in the world”

As soon as the brick with microcontroller is then placed on a 9V battery box from Lego, the machinery starts to run. Luminous overlays can be heard through the transparent stone, which are played and are reminiscent of code. In a short clip, James Brown also shows other 2 by 2 Slope Lego bricks with printed technology that he still wants to work his way through. For example, a stone shows a radar. So it could result in a small collection.