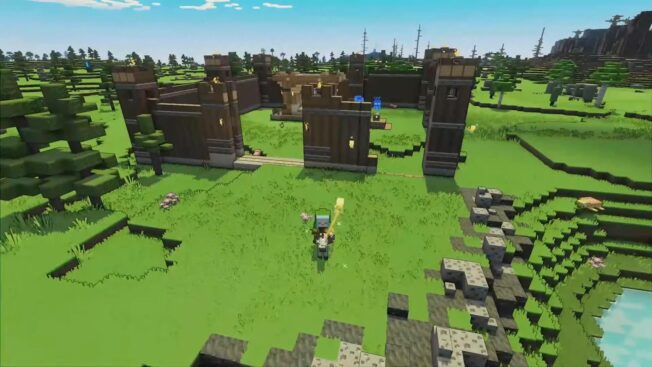 during the Summer Game Fest a brand new Minecraft game was announced. In contrast to Minecraft Dungeons it is however not an isometric Diablo clone – it has a little twist.

Even if Minecraft Legends Reminiscent of “Minecraft Dungeons” at first glance, Mojang has further developed the formula. It is a Action strategy game. You can watch the official trailer here.

The game is powered by Mojang and Blackbird Interactive developed. The whole thing is a bit reminiscent WarCraft 3where a gameplay feature focuses on the heroes in the game concentrated. So it even seems as if we would explore large parts of the game with our hero. However, he is even more central.

And even that Nether Portal reminds me a bit of that Dark Portal from WarCraft. Just a coincidence? In any case, the action strategy game will conjure up “the end of all things” that we must face.

We will recruit troops and she in the fight battle. Also, the building feature seems to play a role, albeit less comparable to WarCraft 3. Mojang writes:

“Explore a familiar yet mysterious land teeming with diverse life, lush biomes, and rich resources. But this paradise is about to be destroyed. The Piglins have arrived – and they threaten to corrupt the overworld. Inspire unexpected friends to form valuable alliances and lead them in strategic battles to protect their homeland. Bring the fight to the Piglins before their nether corruption engulfs the overworld!”

If you take a look at this construction feature want to throw. In this scene we see the character building a dwelling in the background. However, there are not many scenes in this regard. What do you think of the idea of ​​an action strategy game?

Minecraft Legends is the third Minecraft game and appears in Xbox Game Pass – and Although “Play it day one”. So it’s playable in Xbox Game Pass from day one. A release date has not yet been set, but it should be released in 2023 will.

The game will be released for Xbox Game Pass, PC Game Passon the PC for Windows and Steam, Xbox Series X|S and Xbox One.