Graphic from Return to Monkey Island: A Poisoned Discussion 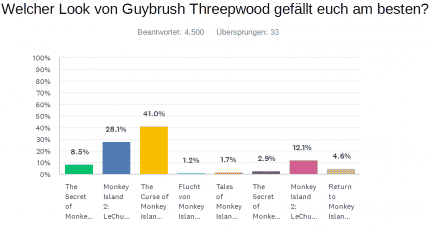 It is a well-known fact that there is no arguing about taste, after all there can be no clear winner. Whether art is good or bad, and what art actually is, is nevertheless regularly the subject of heated debates. And anyone who has spent just a millisecond on Return to Monkey Island knows the debate about its graphic style.

To bring everyone else on board, Monkey Island is this wildly popular series of games centered around the piratical anti-hero Guybrush Threepwood. With seven offshoots from the years 1990 to 2010, the series tried out many different graphic styles, some of which were pixelated due to their time and ultimately culminated in an animation style that today passes as outdated 3D graphics. According to a poll of many thousands of people on our PC Games website, the cartoon graphics of The Curse of Monkey Island from 1997 are the best style for a huge majority of over 40 percent. What is interesting here is that this part in particular also had to take criticism at its time, because the style at the time was so different from its two predecessors.

Of course, when a series changes looks so frequently, one could assume that the fans are used to something and have become hardened in this regard. Wrong thought. With the announcement that Ron Gilbert, creator of the first two installments of Monkey Island, is back on board, there was a lot of excitement from fans.

But when said developer dared to present his personal vision of Return to Monkey Island, the tide turned abruptly. The new Monkey Island is weird, edgy, expressionistic and somehow completely different than usual. But a real shitstorm broke out when the character animations and designs were shown. The style was ugly and Guybrush would be disfigured, were the comparatively nice comments, others aimed well below the belt.

Our survey found that over 40 percent like The Curse of Monkey Island’s style best, and in its day (1997) the style was also critically received.


Only Ron Gilbert himself will be able to assess the true extent of the shitstorm, who announced that he would not publish any further material about the game. He also had to block the comments section on his personal blog because he couldn’t keep up with deleting hate messages. It goes without saying that something like this doesn’t work at all, but the question of the extent to which criticism of a creative work makes sense is a completely different one.

However, opinions differ as to whether video games are art at all or purely service products – entertainment media for the masses. There is no easy answer to this, but there is a difference.

Between titles that are made by hundreds of people in large studios and games that are lovingly created by individuals. The latter probably have more of a claim on themselves to create an artistic work. To be more specific, let’s just compare Return to Monkey Island to Fortnite. 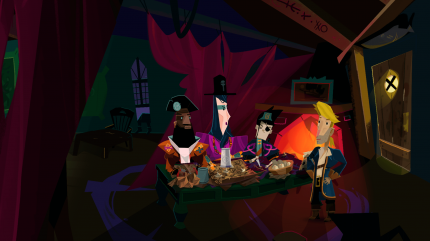 The character designs and animations, in particular, encounter resistance from many fans of the Monkey Island series and trigger harsh criticism.


Without wanting to deny the artistic value of the Battle Royal shooter, this is more of a mass product with a service character. And anyone who uses a service has the right to criticize it to a certain extent.

If a large number of players complain about certain content here, the chances are not bad that those responsible will initiate a change. Mind you, “those responsible” is a company that only wants to make money with the product.

Return to Monkey Island, on the other hand, is an affair of the heart, at least from Ron Gilbert’s point of view. His lifeblood is in it, for him the game is art and something in which he can and is allowed to develop artistically. It’s like the difference between a painting that an artist paints with love and a canvas print from Amazon that depicts a nice, but somehow nondescript subject.