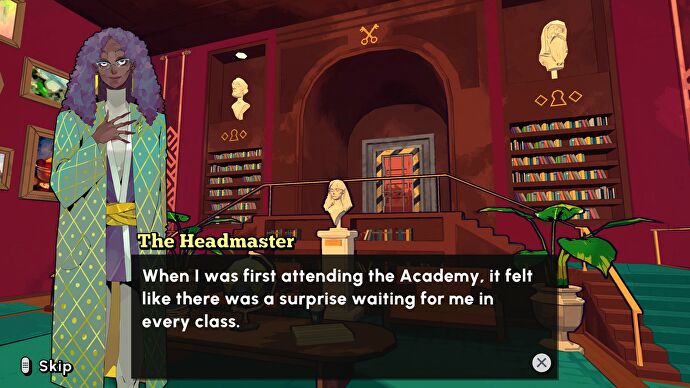 Escape Academy review
Despite its empty halls and predictable plot, it’s a charming escape room sim that’s filled with clever puzzles that reward and rarely frustrate. The entire thing can be played with a bud too, making this a brilliant co-op jaunt.

Having graduated from Escape Academy, I’m left with a notepad of strange scrawls scattered over two pages. A block of crosses, squares, and circles like a snippet of an old GTA cheats page. Wonky boxes filled with letters, like a shed that’s just about held itself together after a storm. The rest? 1) WRO; 2) NYYVR; and other babblings of a newborn trying to make sense of the world. They might seem unhinged – they are a bit – but they’re signs of an experience that was really quite fun, and incredibly, made me feel quite clever.

The game’s story sees you play a budding student of the Escape Academy, a school that trains up the very best escapists in the land. To graduate, you must piece together the coveted Seal Of Escape by beating ten escape rooms that escalate in difficulty. Exploration and story are told in a visual novel style, where you delve into dorms, classrooms, and libraries by clicking icons on a world map. Portraits of stylish teachers slide into view, with chats through text bubbles. Often, you can hover your mouse over objects and inspect them for tidbits of extra info. It’s not loads more info, unfortunately, which does make you hungry for more backstory on why such a curious academy even exists. It’s a cool place, presented in a charming comic book art style and yet there isn’t a lot of history to back it up.

And just like St. Trinians or Grange Hill, the academy’s walls house drama. Except that it’s drama that only seems to affect you and one (1) other student, which knocks the repercussions of a mysterious threat down a peg. For a prestigious school, its halls are oddly empty. And as much as the teachers and the academy’s legendary faculty members have their surface level quirks, there’s no opportunity to peel these back and get to know them on a deeper level. Don’t get me wrong! It’s a fun story with plenty of charm, but temper your expectations – this isn’t Norco or Phoenix Wright.

Still, the game more than makes up for its shortcomings with a series of brilliant escape rooms. This is where the game switches from a visual novel to a first-person perspective, letting you explore and puzzle up close and personal. At first, they’re quickfire rooms but ramp up in complexity as the story weaves some thrills and spills into the mix: There’s a puzzle tower that’s continuously filling with water, so you’ve got to scramble to reach the top before you drown. There’s a puzzle race, where you battle against that one (1) other student in a sprint to the finish. There’s even a puzzle rescue mission where you decipher messages, relay them to someone on the ground, and help them infiltrate a compound. They really are ace.

And the puzzles are just the right level of devious, popping objects like keys and levers in carefully placed spots. Graffiti on walls nod to those symbols written on the piece of paper in your back pocket. Flowers in vases aren’t all they seem. Microwaves hide secrets and statues might look at you funny. Things tie cleverly into other things, subtly encourage you to look or listen or assemble bits in a way you hadn’t thought of before. Then it’s not long before the cogs start clicking into place and you are the one who feels clever.

The game strikes a wonderful balance of difficulty and urgency, with puzzles that tax the mind but aren’t too overpowering, coupled with a timer that’s just the right amount of generous. But if you find a puzzle a bit too tricky, then there’s a handy hint button that pauses the action and delivers up to three clues that progressively steer you closer and closer to the answer. It doesn’t cost you anything either, which goes to show that the game recognizes you’re here for a fun time, not a frustrating one.

Everyone’s mind works a bit differently, so it goes without saying that you might reach a stage where no number of hints can help you make sense of something. I reached this impasse in single player, which was perfectly fun up until my brain was left totally stumped. Thankfully, you can play the entire game with one other pal in local or online co-op, so I enlisted a mate and we teamed up in a jiffy. In co-op mode it shifts to a split-screen perspective, so you can see what your partner is up to. This might sound a bit off-putting, but it works a treat as you’re able to show and tell, instead of awkwardly describing yourself messing about with a complex schematic.

And let me tell you, bouncing ideas off a mate improved the experience tenfold. They talked me through the puzzle I couldn’t complete (truthfully, I still don’t get it), and there was joyful comradery when our questionable IQs combined forces and we untangled things together. And I think this sums up Escape Academy perfectly, as it’s a fantastic co-op brainteaser that’s perfect material for catch-ups and corporate days. Seriously, replace team-bonding sessions with a puzzle-tower and you’re golden.