FIFA 23 puts a woman on the global cover for the first time – who is that next to Mbappé? 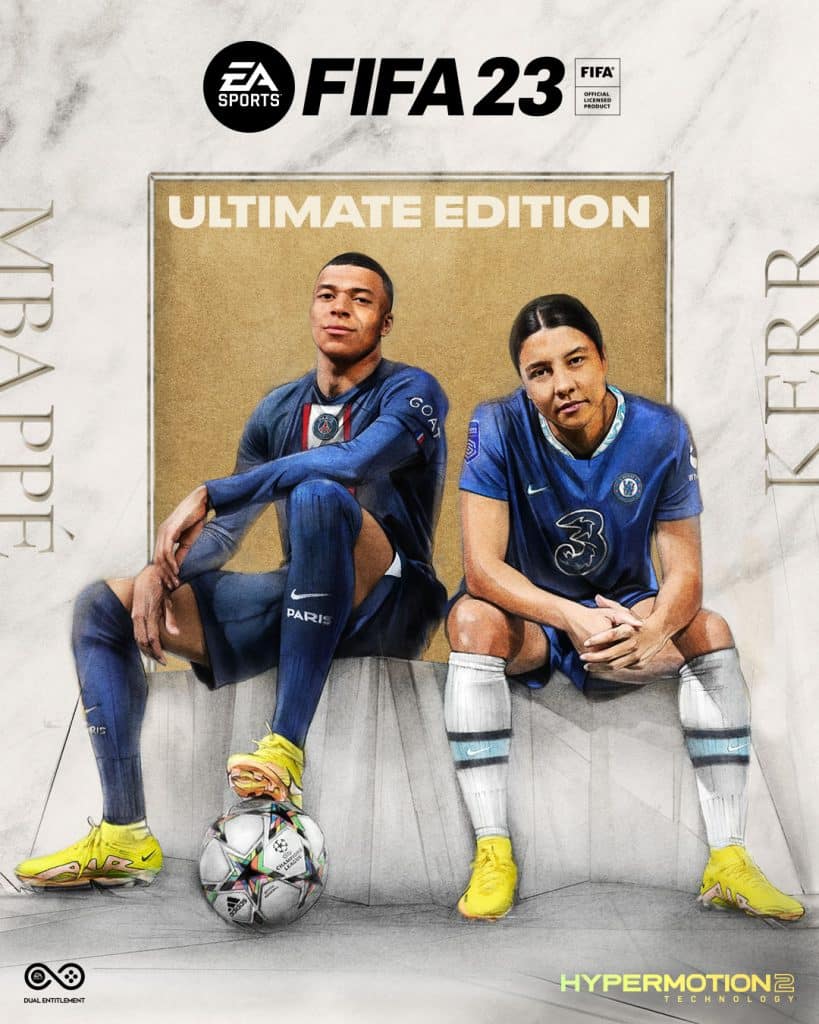 The cover of the FIFA 23 Ultimate Edition is well known. And that brings something special: alongside Kylian Mbappé, Sam Kerr can be seen on the cover. This is the first time a woman has featured on a worldwide cover of the football series.

What is this cover? The cover is the worldwide Ultimate Edition – the variant of FIFA 23 that will bring several bonuses.

On the other hand, what the normal Standard Edition looks like is not yet known, as is the actual content of the Ultimate Edition. An official release date for FIFA 23 is still missing.

The cover itself is intriguing. Because instead of a single player, a duo is at stake this time – Kylian Mbappé and Sam Kerr.

Previously, the FIFA cover only featured representatives of women’s football in exceptional cases: world champion Alex Morgan was on the US cover of FIFA 16, Christine Sinclair on the Canadian version and Stephanie Catley on the Australian version.

But Sam Kerr is now the first woman to be featured on a worldwide FIFA cover.

This is what the new FIFA edition looks like:

Who is Sam Kerr from the new FIFA 23 cover?

This is Sam Kerr: Samantha “Sam” Kerr is a 28-year-old soccer player who has played for Chelsea since late 2019. For many, she is perhaps the best striker in the world.

In 2021, Kerr not only became England champions with her team for the second consecutive year, but also secured the title of top scorer with 21 goals in 22 games. In the Champions League 20/21 she lost with Chelsea in the final against FC Barcelona, ​​but secured second place.

In 2021, the Australian was also voted second in FIFA World Player of the Year rankings, behind FC Barcelona’s Alexia Putellas.

Who is Kylian Mbappé from the new FIFA 23 cover?

This is Kylian Mbappe: Mbappé is almost old hat when it comes to FIFA covers. The Frenchman was also featured on the cover of FIFA 21 and 22 so now he completes the hat trick, so to speak.

To this day, Mbappé is considered one of the greatest talents on the planet, despite having achieved almost everything. The 23-year-old became world champion with the French national team in 2018 and has also won five French championships.

What he still lacks, however, is the title in the Champions League.

What do you think of the two cover stars? Take our poll and tell us in the comments!

How strong will the two cover stars be? There are no official values ​​for either of them yet, but the two cover stars should get strong stats as usual. With Mbappé, it would hardly come as a surprise if he might even become the best player in the game this year.

Sam Kerr was already rated 91 in FIFA 22 and should get strong ratings again as a new cover star. It is quite possible that she will be one of the best players in FIFA 23 this year.

The official ratings for FIFA 23 will probably take a while. You can find out what is already known about the game in our overview of FIFA 23.