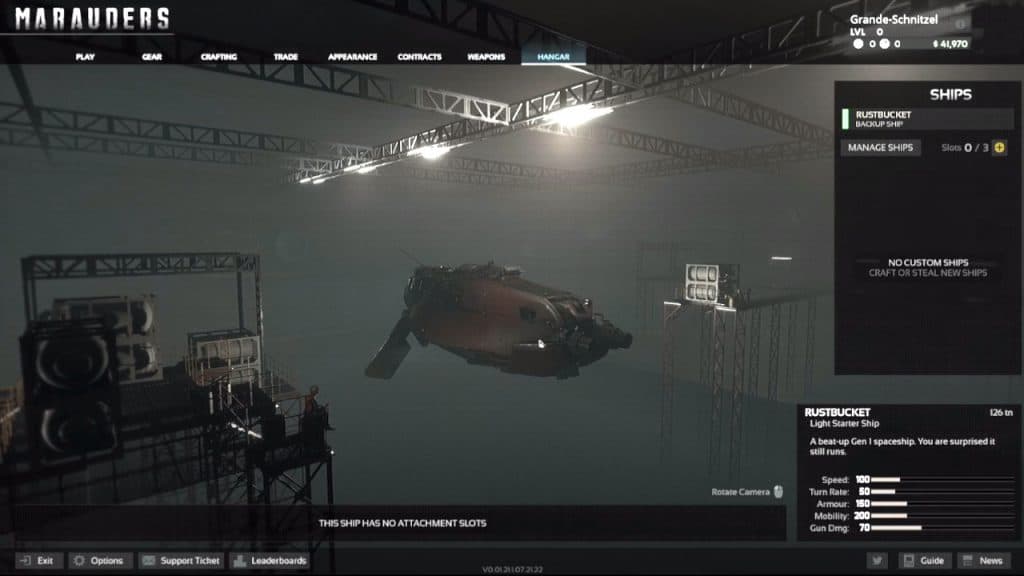 MeinMMO author Maik Schneider watched the new hardcore shooter Marauders in the closed beta and was completely surprised. He talks about his first round in the game and why he can’t wait for the full release.

Marauders is a new hardcore shooter on Steam that I would roughly describe as a kind of “Escape from Tarkov” in space. An extraction shooter through and through. A closed beta ran recently, but there is no release date yet.

As with the popular Tarkov, I lose everything when I die, start raids for fresh loot and a hit in vital areas of my character ensures an unadorned end of the round.

But instead of warehouses there are asteroid mines, instead of Soviet flair there is spaceship ambience.

In addition, the game is divided into two different gameplay situations: I creep through enemy territory with mortal fear in first-person shooter view or jet through mission areas with a rickety space sloop.

More about the author Maik Schneider: Maik cavorts in many genres, but somehow always has a shooter running on the side and has been firing at everything that moves in a digital world for more than 20 years.

He’s only slowly getting into the genre of hardcore shooters, having gained initial experience with it in Escape from Tarkov. With Marauders, this gameplay style could celebrate its breakthrough at Maik.

When I got the first information about Marauders, I immediately thought: The idea is really good, just what I need. But after seeing the trailer, I wasn’t so sure.

The fast editing, a few stutters and few really meaningful scenes – the presentation of the announcement trailer from March 2022 totally put me off. But see for yourself:

However, we got some game keys to test and I looked into the closed beta, which is now offline again.

It didn’t take 5 minutes, I was blown away.

My first mission took me to a typical asteroid field. Debris of all sizes orbits a station in the middle of nowhere. Technical devices can be seen everywhere. The technology looks old, dilapidated, but somehow progressive.

See also  Cyberpunk 2077: Excel should enable 100% completion in the game

At this point the first positive surprise: I steer the ship completely and it feels good. The steering is a bit bitchy, not too direct and the inertia makes precise maneuvers difficult.

In addition, Marauders uses the dieselpunk setting. That means: I fire bullets at opponents. Lasers, phasers, disruptors – none. Together with the controls, there are strong prerequisites for fast-paced battles in space.

The space combat is an essential part of Marauders, which I never expected to this extent.

What does “dieselpunk” mean?

The term describes a sub-genre of science fiction. While in the more well-known “steampunk” setting old-fashioned-looking technologies are based on steam energy, the “dieselpunk” setting uses diesel fuel.

The setting is often darker and dirtier than steampunk, but slightly more advanced in the tech style.

Marauders uses an alternate timeline and is set in 1992, after wars between three rival factions drove many humans off Earth.

The eponymous game characters “Marauder” are a kind of pirates who can only survive by plundering.

After the WOW effect I left the ship view and went into the first person shooter mode. I stand on the purposeful bridge of my little adventure ship. The gray of the steel walls is broken only by the red warning signals that shine all over the ship.

I was still fumbling in the menu when there was a bang. I looked at the old consoles, at rusted pipes and was sure – the sound comes from my spaceship. As the description says, I’m surprised it still flies.

With the second bang a short time later I ran out of the control options directly onto the bridge. The noises were not signs of aging of my ship, it was shelling – enemy contact, I was in the game for 2 minutes.

Another “Marauder” unabashedly fired at my little noob ship. But the enemy’s cart wasn’t any better. I certainly wouldn’t describe the ensuing fight as “epic”. But at least it was exciting.

Two bloody newcomers engage in an embarrassing duel in slow motion and only luck determines the winner. I was unlucky and conceded two nasty hits before the fight. But revenge was to come.

See also  Steam Summer Sale: What games are on the community's wish list?

Because ships don’t burst into pieces in Marauders. You have enough time to calmly walk into the belly of the rattletrap, take an escape pod and leave the sinking ship.

For me, however, it was more of a panicked sprint through all the corridors to finally stand in front of the capsules after a complete tour of the ship.

I didn’t know, of course, that I had enough time. But what I did know: These helpful escape pods are also nasty boarding modules that I use to get onto the enemy’s ship.

Out into space, a direct course to intercept the annoying enemy and after a skillful left-right evasive combination, I suddenly found myself in the sparsely furnished cabin of the enemy.

The opponent was probably just as overwhelmed as it was for me. However, I wasn’t the one with an enemy in the space basement.

At that moment, alone on the enemy’s ship, his footsteps on the metal floor getting closer, at that moment I was extremely deep in the game, the immersion was almost perfect.

For a short time, I was the type who had no ship and therefore no possibility of escape. But one chance remained. Eliminate enemy, take ship, go home with a black eye.

As the enemy Marauder ran down the stairs, my heart rate was as high as the rate of fire of my MP40. I twisted completely when firing, but two or three hits landed and it was enough.

I grab his stuff, then full throttle onto the bridge and home in the same way. I slowly calmed down, mentally sat in front of my desk again and already had a fantastic evening. The “raid” lasted only 5 minutes.

After my first impressions of Marauders I wasn’t expecting anything. The gameplay sounds good, but there is something like that more often on Steam and then comes the disappointment at launch.

Then the shooter suddenly hits me with such an introduction to the game. After 5 minutes, love at second sight.

I shot a few hours in the closed beta and my impression has become even more solid. I would particularly like to emphasize the sound in the first-person shooter gameplay.

It’s extremely crisp and precise. Even distant footsteps can be heard well, and the direction can be precisely determined with the appropriate headphones. In addition, every little movement causes a sound, which ensures that you always know pretty well what’s going on around you.

In addition, the enemy density in the first-person shooter missions is high. NPCs are constantly running around corners and opponents, Marauders, are not uncommon. This brings in a lot of action and ensures a good supply of loot.

This mix, spaceship combat and hardcore shooter on a looting mission, this mix really turns me on. And it was done really well too.

I still saw weaknesses in the closed beta in terms of performance. There were always minor stutters. But not during the battles, which mostly went smoothly.

In addition, I recognized weaknesses in balancing – armor is too strong compared to the low life energy. Here I would wish for higher life energy.

Also, campers have an advantage because player localization works so well through the audio system. You’re only “hidden” if you don’t move at all.

So far it was only a beta version and there is no concrete release date yet. As soon as the time comes, however, I’ll be ready with a box of the finest chocolates and fragrant flowers to hug my new shooter love on Steam.

Leave me a comment with your thoughts on Marauders. If you want to read more about my gaming adventures, take a look here: Why my girlfriend will always be better than me at games like Rust.