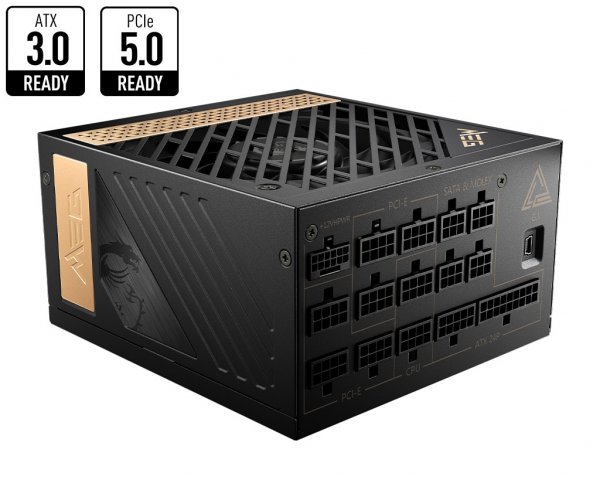 08/16/2022 at 2:41 p.m
from Maximilian Hohm –
With the MEG Ai1000P and Ai1300P, MSI has introduced two new power supplies based on the ATX 3.0 specification. Both deliver their full power on the 12V rail and appear to be properly equipped. According to the new specification, they must be able to reach twice their rated power at peak, so that more than 2 kW can be delivered. Read more about this below.

The ever-increasing power consumption of graphics cards poses problems for the previous power connections. While six-pin sockets are specified for 75 watts, eight-pin connectors still allow 150 watts, but custom models of the Geforce RTX 3090 Ti are often beyond 450 watts, so a new connector with a new specification had to be created for such graphics cards. The 12VHPWR with 12+4 pins, designed according to the ATX 3.0 specification, is therefore specified for a power consumption of 600 watts.

See also  Activision boss is said to have covered rapists

MSI has now introduced two new, fully modular power supplies with the ATX 3.0 specification that can provide rated power of 1,000 and 1,300 watts and provide 12VHPWR connections without an adapter. The MEG Ai1000P and Ai1300P both deliver up to 92 percent efficiency and are 80 Plus Platinum certified. They have all the relevant protection circuits such as over-current protection (OCP), over-voltage protection (OVP), overload protection (OPP), over-temperature protection (OTP), short-circuit protection (SCP) and under-voltage protection (UVP). Both power supplies offer a 12VHPWR and eight regular eight-pin sockets. The full power is provided on the 12V rail and, in addition to fully sleeved cables, control via MSI’s center should be possible. MSI has not yet announced prices or a specific release date for the new power supplies.