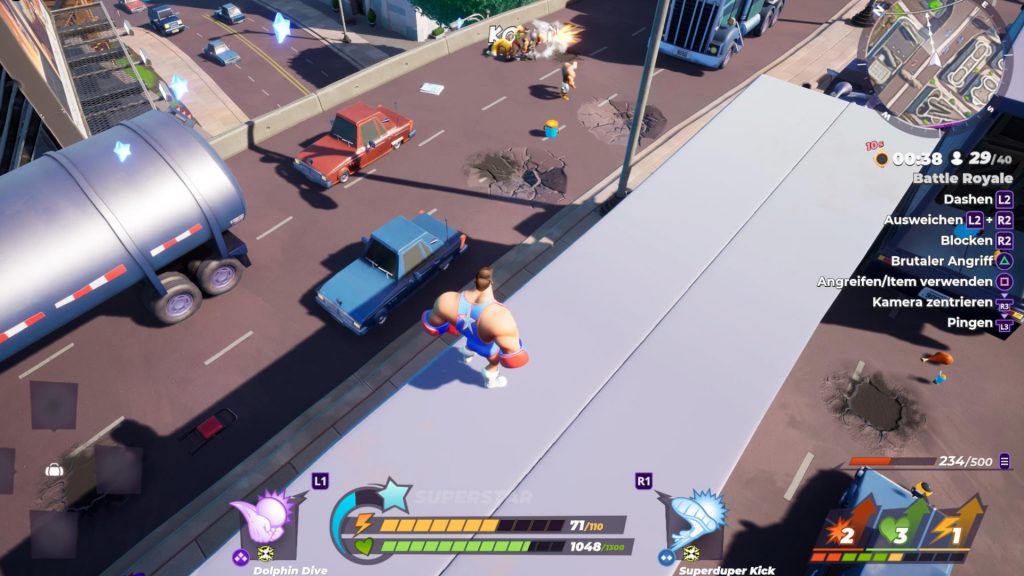 Rumbleverse looks like a cartoon, has muscle-bound wrestlers as the main characters, and the moves are way over the top too. Yes, the approach is pretty silly. But if you like crazy games, you should definitely take a look at the new Battle Royale, says MeinMMO author Max Handwerk.

All hell broke loose on the street below me. A pumped-up hunk is slammed against a wall while an agile zigzagging lady picks up a street sign and slams it in the face of a scrawny guy.

The guy activates a spherical shield just in time to intercept the swinging traffic sign. But he is powerless against the brutal “chokeslam” that his opponent uses next.

She grabs the poor wretch by the neck, pulls him up with a mighty leap and dashes towards a car roof at breakneck speed. From there, they both bounce back up into the air, only to crash down onto the street. The impact is so hard that a small crater is formed. this is my moment

I take my measurements on the ledge of my house roof – and jump off! My wrestler catapults himself into the air, flips in midair, elbows up, and dives like a hawk in a dive.

With the weight of a hitting comet, my wrestler’s elbowdrop crushes the poor guy, who was already rammed unsharpened into the ground. The pressure wave also carries away the aunt who put it on me so nicely. The guy is history – but she is still a danger.

I turn to her for the next devastating move. But suddenly someone grabs my wrestler from behind, spins him around in circles and fires him Olympic hammer thrower into the eternal hunting grounds. Or, more precisely: in the water. It comes down to the same thing though, because whoever lands in the sea is eliminated.

So ends one of many chaotic rounds I’ve spent in “Rumbleverse” in the last few days. And even if I rarely emerge victorious from the whole thing: I have a lot of fun with this game.

You can see the gameplay trailer here:

Suplex From The Rooftop Straight To Hell: Rumbleverse is silly, but not stupid

Yes, there is an island with a big city, a circle that keeps getting smaller, and you want to be the last 40 players standing at the end. You can also collect loot and there is also the now obligatory Battle Pass. But this is where the similarities to established titles largely end.

You are not soldiers who have to pick up firearms. No, you are goddamn wrestlers who want to wipe the floor with their enemies! And they’re obviously insane, because they don’t shy away from insane heights or completely exaggerated attacks from their opponents.

But one after anonther. Your primary weapon is your body: you can rain down combos of light attack hits on your enemies, or use a heavy attack to attempt to breach their guard. To do this, you have objects from the environment available that you can slam your opponents in the face. Examples are:

There are also numerous special moves of various rarities. You can find them in the form of books, which in turn are in loot boxes. So they are the equivalent of the main weapons of other genre representatives.

Your wrestlers can learn up to two special moves at once, which you can swap out if you find better ones. These moves are just wonderfully over the top: every chokeslam, every spear tackle, every diamond crusher comes with colorful effects and hard impact animations.

Then there’s the ridiculous exaggeration: you don’t just grab your opponents and throw them on their backs. No, you first jump eight meters in the air, turn twice and then kick her towards infinity (or against the nearest house wall) with a violent kick.

The comic style makes it feel like a playable Saturday morning cartoon from childhood. But, and this is important: Even if the whole thing looks silly on the outside, the game is not stupid. It takes a lot of skill to survive.

A surprisingly complex combat system for a battle royale with wrestlers

How matches work in Rumbleverse: When I first launched the game, I expected some hilarious power moves, blunt brawls, and some short-lived fun that I would quickly erase from the PlayStation.

But I quickly realized that if you just run around dull and hit it, you’ll eat up a lot of dust and get thrown out quickly. The game requires a lot more skill than I thought.

On the one hand you have four places for items that you can carry around. These can be weapons, but also chicken parts for the regeneration of life points or stamina potions. There are also three different “powders” that can be collected. you improve

You should also collect them over the course of a match, because in the end you need such advantages against your enemies.

The fight itself requires not only muscle, but also a bit of brain power.

Yes, these aren’t difficult Elden Ring-level battles. But it is much more complex than initially expected.

Then there is also a “Superstar” meter. This is filled by collecting stars and fighting battles. When it’s full, you activate Superstar mode and you’re immediately faster, stronger and regenerate your life points. On the opposite side, however, a spotlight shines on you all the time – so everyone can see you very well, surprise attacks become more difficult.

In addition, you get access to a super attack that not only looks powerful, but also causes a lot of damage. It can happen that you pull the opponent’s entire life bar with a violent throw from a great height. But, as I said: the headlight. And when such a glowing wrestler comes storming towards you, you actually already know: Now you should get on with your feet.

Fortunately, the whole thing can be learned quite well on a tutorial island. I would actually recommend that. I started the game with no explanation at first, and it didn’t end well.

Oh yes: you also have to take the circle into account. If you stay too long outside of the ever-shrinking combat area, you will be counted and eliminated as well. As a result, if you survive long enough, the “finale” will create glorious chaos with many fighters in a small area.

Rumbleverse finds the right mix of nonsense and suspense

I could get bogged down in the details of this game forever, but I’ll try to cut it short here: Rumbleverse took me by surprise and has kept me hooked to my controller for a few days now.

Especially at the beginning I lost very often and very quickly – precisely because I had underestimated how much you have to think when playing. But once you understand the mechanics a bit, every fight becomes an exciting exchange of blows.

A Rumbleverse match almost feels like several fights of a beat’em up in a row. You find an opponent, duel and either get kicked out or continue.

Due to the small map, it doesn’t take very long until a new challenger appears – and then the next fight is on. There is also a chaotic component, because you never know when a motivated third party will intervene with an elbow drop from the thirteenth floor.

The mix of cartoonish exaggeration, exciting combat and a pinch of mayhem results in a really enjoyable battle royale that quickly motivates you to get better. Basically, I currently only have one point that I find really frustrating.

Unfortunately, the search for a new match sometimes takes forever. In solo mode you often have to wait several minutes for a new match to be found. One evening I wanted to do a few laps in duo mode, but the countdown sometimes went over 5 minutes. It’s incredibly frustrating, especially at the beginning, when you die very early in the match, want to try again and then can wait.

But I’m just hoping for improvement here. Because once you’re in the match, you can have a lot of fun with Rumbleverse.