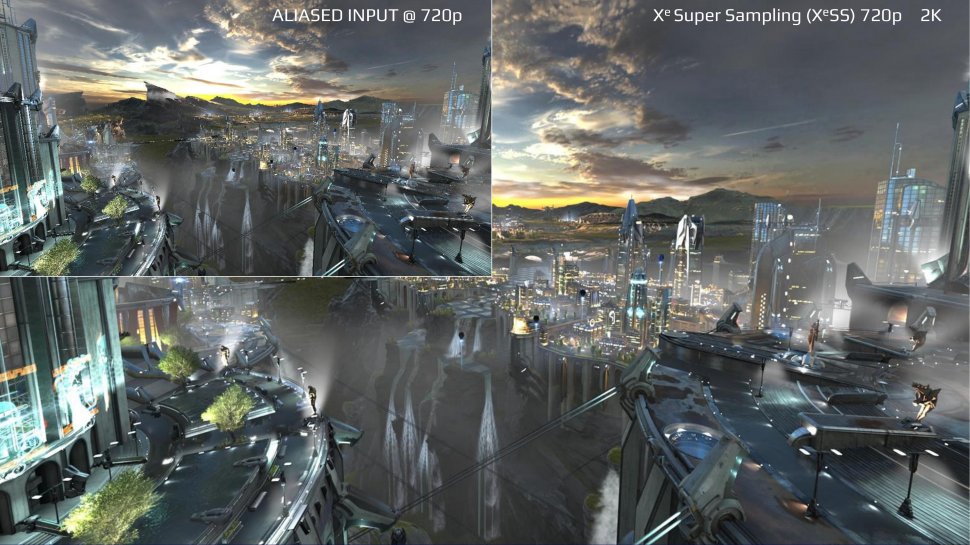 08/27/2022 at 09:30 am
from Maurice Riebling –
In a deep dive, Intel presents the upscaling technology XeSS in more detail. Also included are some benchmarks, image comparisons and smaller announcements.

With an almost half-hour deep dive, Intel wants to explain and make palatable its own super-sampling technology for its own Arc GPUs, XeSS. In demos and benchmarks, the chip manufacturer emphasizes the advantages and, above all, the performance gains. But the support from games is very limited for the time being and the advertised doubling of performance that is possible with it is not without its aftertaste.

First of all, the video deals with some basics, what XeSS is, how it works and why it is worth using. Then there are the first benchmarks and performance numbers. Tom Peterson, who co-hosts the video alongside Ryan Shrout, explains that the gains in framerates amplify as the game becomes more graphically demanding. Accordingly, the increases with a factor beyond x2 are particularly noticeable in Ghostwire Tokyo and Hitman 3 at maximum settings including active ray tracing.

However, such values ​​are only provided by the performance mode, which is one of the four options of XeSS and, according to the name, is also supposed to get the best possible performance. The profiles “Balanced”, “Quality” and “Ultra Quality” join in with increasing image quality and decreasing frame rates. The main difference between the modes is the original render resolution.

Intel is taking an open approach to the developer community, giving all developers the opportunity to integrate Intel’s XeSS technology into their engines. Furthermore, a collaboration with the creators of 3DMark, UL Benchmarks, is intended to promote Intel’s Arc GPUs and XeSS. The “3DMark XeSS Feature Test” compares native rendering including active TAA and XeSS in different modes. In addition, individual rendered frames can be compared using the “Frame Inspector” so that the differences in quality are made recognizable. An exact date for the publication is still open.

Ultimately, XeSS will remain limited to a few selected games for the time being. 20 titles initially support Intel’s AI Super Sampling technology. Among them are the already mentioned titles Ghost Wire: Tokyo and Hitman III. Also represented in the list are Death Stranding: Director’s Cut, Shadow of the Tomb Raider and Call of Duty: Modern Warfare II, which will not go on sale until October 28, 2022, but will then directly support XeSS.