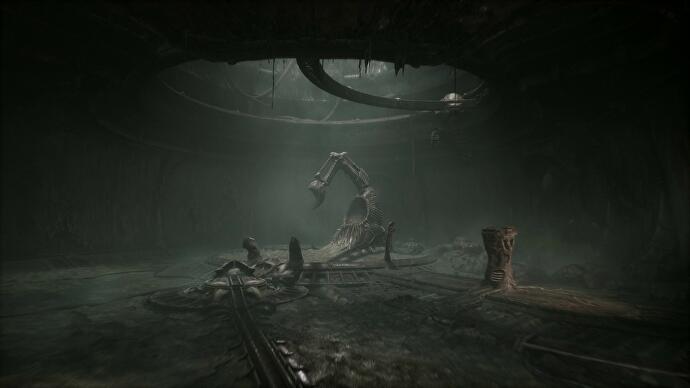 I only have an hour to play a detailed demo of Scorn – at gamescom by the way, only with a long-term embargo. It’s like that sometimes. In any case, despite the time limit, I keep stopping because I’m just amazed at how convincingly Ebb Software mimics the style of Alien creator HR Giger and makes me feel like I’m walking through a giant sculpture he created.

Apparently organic and mechanical flow into one another. Lights shimmering through shallow fog give the rooms an atmospheric depth. In small pits there are masses of intestines and in the middle there is something reminiscent of dough processing. Where am I? I dont know. And that’s how it’s meant to be. You wake up in this strange environment in front of a gigantic tower before falling down and having to find a way through locked doors – wherever that leads.

Scorn doesn’t explain himself. There is no mission description, with a few exceptions no screen displays, not even the controls are explained. Only when you operate machines do inconspicuous symbols show in which direction you can move a gripper arm or a lorry, for example. The game revolves around the correct use of such machines, which is why you get a kind of key mounted directly in your left hand at the beginning. Only with that you can open the door to the first big puzzle.

In a large complex there, I moved more manipulators, discovered skeletons of humanoid creatures squeezed into giant eggs, and found a large gate, which, however, must be opened by two machines far apart from each other.

And then I see a kind of chair, which I can also activate – after which something like a circular saw descends from above and runs over the chair from top to bottom. Hovering over another chair is a giant scraper that, when activated, sweeps across the chair to lift something out and appear to throw it into a large hole. There’s no blood yet, just the idea in my head…

…but over the next few minutes I quickly realize that Scorn isn’t just about the horror that happens to you. But at least at this point it is also about what you are willing to do to escape from this horrible prison. I soon discover a row of still intact eggs, one of which I pull out and have it transported via the gripper arms into one of the carts, where one of these human-like creatures then sits opposite me: squashed together, grown together with the egg and grunting disoriented while I pull the cart into the room with the scraper. And press start.

The scraper tips the supposed corpse into the big hole. What remains is a severed arm, which I use to activate the second control panel in front of the gate. So how exactly to use the machines (to get the egg I had to transport it to the destination via some kind of sliding puzzle) is the playful question. What is it about this horrible device, the narrative.

At this point I also take a critical look at the first major puzzle. After all, I didn’t even know that triggering the sequence of events described “correctly” would give me an arm, I just did what Scorn offered me as an interaction. There was no recognizable task, so I felt more responsible for operating a film projector than merged with the main character.

Either way, I want to know how it goes on. In the demo, a new, completely different complex of interconnected rooms followed. There I received something like a steam hammer, with which I could not only operate other machines, but also “shoot” mechanical opponents who blocked the path with a noxious gas. So it seems to be going on in a very varied way and definitely atmospheric. Scorn isn’t supposed to be all that long – around six to eight hours according to Ebb Software – which is why I’m particularly excited to see just how much narrative there is in this macabre trip. Or does the grandiose setting only serve as an atmospheric diagram of perverse puzzles? According to the first impression, both are quite possible.