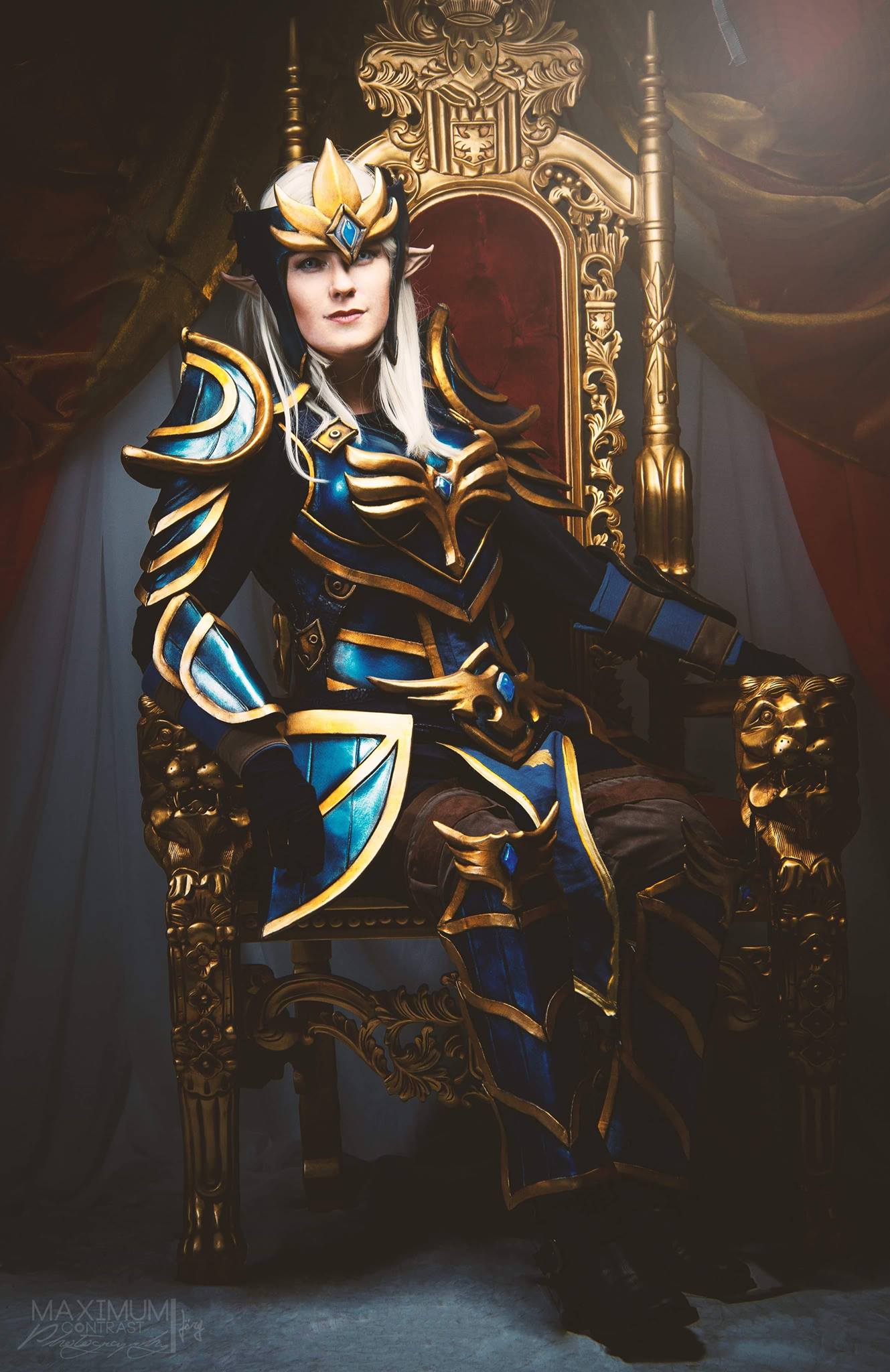 The MMORPG The Elder Scrolls Online can also be found on the streaming platform Twitch. One streamer in particular stands out as she presents herself in her impressive homemade cosplays. We at MeinMMO wanted to know how the MMORPG captivated you.

Often acclaimed by fans, ESO’s story content has some distinctive characters. Both because of their personality and their visual appearance. This prompts many a fan to wrap themselves in the shell of their favorite characters.

This also applies to the streamer Essence Costumes to. Because she often presents herself in her streams on Twitch in beautiful or beautifully scary cosplays of ESO characters. Anyone who has ever designed and worked out cosplays knows that there can be a lot of work behind such a costume.

In our cover photo (captured by vyn_photo), she embodies Queen Ayreen, leader of the Aldmeri Dominion. She manages to shine both in the guise of such a venerable figure of Elder Scrolls lore, and in the guise of the most depraved characters, like the traitor Mannimarco.

We wanted to take a closer look at their cosplay work and learn more about the creation and ideas behind their cosplays. And why she’s particularly drawn to the characters from The Elder Scrolls Online.

Anime cosplays led her to the ESO legends

How and when did you first become aware of cosplay?
“Through a friend, around 2007. She got me a ticket to an anime cosplay fair for my birthday because she knew I was starting to get interested in anime. It started so slowly and has captivated me ever since.”

When did your first cosplay come about? What was that cosplay?
“After we were at the fair, we immediately planned our first cosplay. My first cosplay was Sabaku no Gaara, or Gaara from the desert. This was my absolute favorite character from the anime Naruto. My whole family got involved in the cosplay. We all made the gourd that Gaara is carrying out of papier-mâché. That was a really good time.”

Ever since you started streaming, have you had any plans to show off your cosplays?
“Yes, definitely! My laptop, which I used when I started streaming, couldn’t record a stream and run a game at the same time. That’s why I initially showed crafting streams, like how do I build my cosplays, how do I build my weapons. Then when I got a better PC, I started streaming my favorite game The Elder Scrolls Online as well. At that point, I already had the Mannimarco and Queen Ayreen cosplays, so I knew right away that I wanted to share those cosplays with the ESO family as well.”

How does a cosplay stream like that work for you?
“I’ve done 3 different cosplay streams now. Basically they go the same way. First I do the makeup for the cosplay in the stream. Either I’m already wearing the right clothes or something similar. But sometimes my viewers can also be there as I wrap myself in armor, for example. My husband helps me with this and finally a background that is tailored to the character is faded in over the green screen. Then there is a 10-minute break, during which the first photos are taken. They will then be shown directly in the stream. But in the future you should be able to see the shooting live.”

ESO Cosplays hold a special place in our hearts

Do you currently have any projects planned or are you currently working on a new cosplay? And when will we see that?
“Right now I’m still working on Lyranth from ESO. Only 1 or 2 details have to be done. Otherwise, a cosplay of Cadwell is planned next. But I won’t be presenting the cosplays until the end of next year at the earliest.”

Which ESO characters have you already cosplayed for?
“My very first ESO cosplay was Mannimarco. But the Mannimarco from the cinematic version, i.e. the trailer. As soon as I saw it, I thought to myself: I have to do it! Next came Queen Ayreen. I had the same thought when I first saw her on a quest in Auridon. From Greymoor I was then seen as Fennorien and then I started my current project, Lyranth. Another Daedric prince is planned after Cadwell, but I’m not sure who that will be yet.”

Besides ESO and your cosplays, what content do you see in your streams?
“I plan to do more crafting streams again soon. Otherwise I play something else at times, at the moment I play Cult of the Lamp occasionally. But I’ll always stay with ESO, it’s my absolute favourite!”

Then you surely have a favorite quest in ESO?
“I love the quest line with Narsis Dren, a Dunmer that you meet every now and then in different places in Tamriel. Something weird happens on every quest.”

Is there a class or role in ESO that you particularly enjoy playing? And do you have a favorite among your own characters?
“My first character I made in ESO was a Nightblade, and she’s still my favorite character. She’s a stamina DD, but now I prefer to play tank or heal. I just love throwing glitter with my little Templar. That’s why my healer and tank are also on my cosplay to-do list. Since my Nightblade is a Khajiit, I’m unlikely to cosplay it. I would just be way too perfectionist.”

See also  How to fix brightness issues on iPhone screen

Do you have a personal favorite cosplay?
“That’s very difficult! I love all my cosplays and all ESO cosplays have a special place with me because I love the game so much. But my absolute favorite, just ahead of the ESO cosplays, is the Elf Warrior. I actually wore it continuously for 5 years. This cosplay was the first time I really noticed that I put a smile on people’s faces.”

What connects you to ESO right now and makes the game so special to you?
“Because of Skyrim, I was really looking forward to it even before the release of ESO. At gamescom 2013 I loved it after just 15 minutes of playing. I kept queuing up to gamble again. The storytelling is just great in every chapter and the side quests are all so beautifully detailed and lovingly designed. It just got me hooked and I wanted to discover more of Tamriel. Just having everything fully voiced is perfect for immersion.”

Do you already know our other ESO Community interviews?
If not, then take a look:

What is your favorite way to spend your time in ESO and what do you like to show off in your streams?
“My favorite pastime in ESO… I love stealing (she laughs)! I’ve worked out entire thieves’ sprees in individual cities to figure out the perfect pickpocketing routes.”

The cosplay community is totally open-minded

What were your best cosplay moments?
“Where my heart always breaks the most are the moments when I actually wear a cosplay for the first time. It’s a personal highlight for me to see the whole thing together that I’ve been working towards for so long. Then when I see people grinning and beaming because they like the cosplay so much, it makes me overjoyed.”

What other positive experiences have you had through your cosplays?
“I always had a good connection to other cosplayers and we quickly warmed to each other and exchanged ideas. It didn’t matter if you knew a certain character or not. If you liked a costume, you just said so and both were happy about it and took photos.”

Are there aspects of cosplay that you particularly enjoy? And which steps do you sometimes have to grit your teeth for?
“I always start with the gun. I have the most fun designing and carving the weapon. At the beginning you also test which material suits you best. That’s where ideas can develop really well. After that comes the armor. I usually do wig work in between when I don’t feel like crafting. I always try to postpone all sewing as much as possible because I don’t like it at all, even though I’ve gotten better at it in the meantime. Grinding off the armor parts isn’t that much fun either, since the resulting dirt is all over the apartment afterwards. I think the painting at the end is great. You can work out the details really well. It’s great to see what effect you can still get out of it.”

What then motivates you to still bravely get through the unloved tasks?
“That’s the beauty of it. Even if you occasionally think: “What am I doing to myself?” And then it ends up looking so great when it’s done. It’s just a really nice feeling.”

What were your biggest or most annoying blunders?
“It makes me think of the past, when I was still working with Styrodur and didn’t know that the material could also be sanded. Mind you, but only with a breathing mask! I carved for days and then there were regular moments when I “carved” myself and the work of 3 days was over. It was then much more pleasant to grind.”

Do you have any crafting tips for newcomers to the cosplay scene?
“I make most of my armor and weapons out of Worbla thermoplastic. You heat it up with a hot air gun and then shape it however you like. As long as it’s warm, it’s similar to modeling clay. The nice thing is that there is no waste, because you can reuse leftovers from heating. Another material I work with is EVA foam. In contrast to the Worbla, it is lighter and remains softer and more flexible overall. This has the advantage that it is more comfortable and also more resistant, even if you are bumped into in cosplay. However, there is a lot of waste during processing.”

Do you already know WesensCostumes or is the name brand new to you? How do you feel about cosplays? Are you enthusiastic fans and have you ever made a cosplay yourself? Let us know in the comments!

We asked Wesens about her favorite class in ESO. But what about other ESO players? You can find out in our ranking of the 6 classes of the MMORPG ESO – from unpopular to popular.