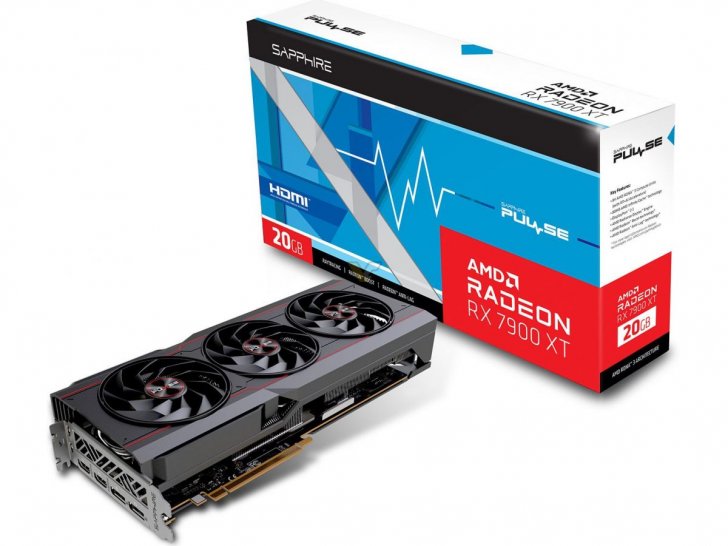 12/13/2022 at 3:21 p.m
from Valentin Sattler –
Videocardz has released images of Sapphire’s entry-level model, the Radeon RX 7900 XT(X) Pulse. Visually, the new custom design is close to the RX 6800 XT Pulse, but at least the fans have been replaced.

AMD’s last flagship, the Radeon RX 6950 XT, was only offered in relatively few variations by exclusive partner Sapphire: In this country, the model was only sold as Nitro+, Nitro+ and Toxic. With the new Radeon RX 7900 XT(X) graphics cards, on the other hand, the variety of products is increasing: Models from the Nitro+, Toxic and Vapor X series have already been spotted, and now pictures of the new entry-level model from the Pulse series have also appeared.

The pictures of the RX 7900 XT(X) Pulse may look familiar to some readers, because the cooler cover is very similar to that of the already available Radeon RX 6800 XT Pulse. The biggest visual difference comes from the three built-in fans, which are apparently identical to those of the RX 7900 XT Nitro+. Under the hood there should also be other changes to the cooler that go beyond just adapting to the new PCB. Because while the old model was only 2.5 slots thick, the cooler of the Sapphire RX 7900 XT(X) Pulse has 2.7 slots according to Videocardz.

Additionally, the website speculates that the Pulse uses the same custom PCB as Sapphire’s Nitro+. The built-in power connections speak for this: The new Pulse, like the reference design, only has two eight-pin sockets. A third socket – like the one built into the Nitro+ – would still have room. Aside from the power connection, further adjustments would of course also be possible in this case – especially with regard to the power supply.

Last on the topic: Radeon RX 7900 XT(X) Nitro+: First images from Sapphire and from the web

Unfortunately, there are no further technical details for the new RX 7900 XT(X) Pulse yet. As usual, the Pulse model is likely to be Sapphire’s cheapest custom model, above which the Nitro+ is classified. Accordingly, a somewhat poorer performance can be expected from the cooler, and a potential factory overclocking of the model should also be lower. In the end, only Sapphire can say for sure, and it could take a while until then: According to Videocardz, the Pulse has not yet reached reviewers, which could speak for a delayed release.