Steam Players Celebrate V Rising, But PvP Is Too Harsh For Some: “It Shouldn’t Be Like This” 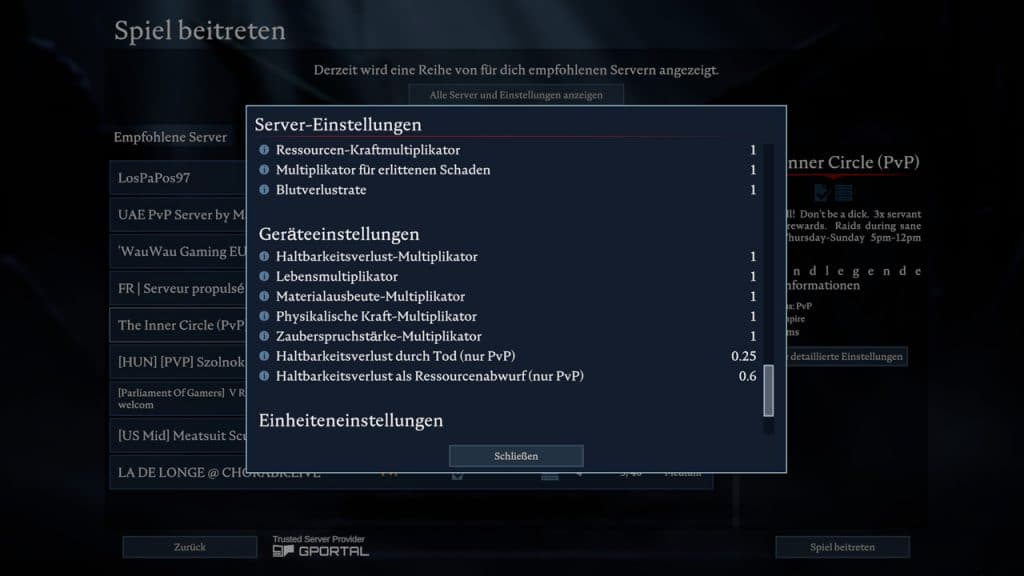 In V Rising (Steam) you can choose between PvE and several PvP modes. The level of difficulty varies depending on the server. Some players find the PvP modes in particular unfair and annoyed, while others celebrate exactly that.

What modes are there in V Rising? There are exactly 4 different modes you can select before connecting to a server:

The majority praises the PvP mode, but there are also voices that say that PvP is annoying as a solo player and that you don’t stand a chance, especially as a newcomer.

So you can’t start the Steam hit anymore and are you too late? MeinMMO author Benedict Grothaus has answered the question in detail:

Can I still start with the new Steam hit V Rising or will everyone knock me out?

Why is the PvP mode perceived as too hard?

Players noticed in one reddit thread states that the cost of repairing gear when you die is way too high, especially when you’re at higher levels. The creator says that by doing this you lose half a day of farming.

Also, he thinks it would be appropriate if the durability didn’t get attacked or at least there could be a repair bench where you could repair your gear for free.

The user idogadol also agrees with the thread creator and says: “I completely agree. I win most battles on the PvP duo server I play on. But when I die, it’s hard. If I need to use all those valuable resources to repair my gear (via reddit).”

sosl0w also says it “shouldn’t be like that” and complains that he’s died twice and all his equipment is in the yellow zone (via reddit).

In addition, some players write in Steam reviews that PvP is only for people who also have friends who play with you. As a solo player you have bad cards (via Steam).

They also complain that stronger players attack the weak in groups and loot them – you have no chance as a newcomer (via Steam). This not only happens in normal PvP servers, but also on servers in PvP+ (via Steam).

Is that really a problem?

Not necessarily, since you have 2 options to avoid exactly these difficulties.

Before you join a server, you can select “see detailed settings” on the right side of the window. You can then see how the damage multiplier on the equipment has been adjusted and whether you don’t even get a 2-hour pup protection – i.e. cannot be attacked.

If you don’t find a server that you like, you can create your private game and customize all the settings until they suit your playstyle.

However, there are mostly servers online that have the default settings and will strip you of 25% of your armor’s durability if you die in a PvP match. If you also really want to play with others, but don’t have anyone in your circle of friends who also plays the game, this could become a hindrance (via Steam).

Others say the standard PvP rules are spot on

What do other players say about this? They find exactly the heaviness about it just right. Reddit user Palin_Sees_Russia writes: “I think that’s good. This makes people think twice before going into PvP. Because the consequences of losing are so high, you don’t spam or fight every single person you see […] (via reddit).”

Furthermore, the combat system in particular is often praised in the positive reviews of V Rising. Another fan wrote: “This game is for those who want a survival game with a solid combat system that offers both PvE and PvP (the latter is the best experience I think) (via Steam).”

If you don’t feel like PvP or if it’s too difficult for you, you can simply join in PvE mode and don’t have to worry about strength or weakness in this regard.

What do you think of PvP in V Rising? Have you already been on servers and encountered the same problems or do you have other criticisms? Write it to us in the comments.

One thought on “Steam Players Celebrate V Rising, But PvP Is Too Harsh For Some: “It Shouldn’t Be Like This””