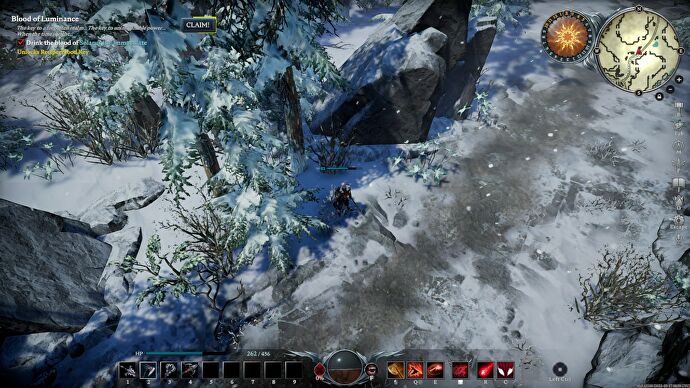 Vampiric survival sandbox V Rising has, according to Steam’s player counts, entered itself quite a following. That includes RPS’ own Ed, whose otherwise glowing preview mentioned some performance issues on Nvidia GPUs.

I’m duty-bound to investigate any potential hardware hitches, though since V Rising is only in early access, this isn’t going to be the usual appraisal of how it performs on various PC hardware. That can wait until it’s had more of the spit ‘n’ polish treatment that typically comes with the status of actually being finished. That said, I have done a full sweep of V Rising’s graphics settings and their performance impact, so if your FPS count is melting like a Nosferatu on an ill-considered Corfu holiday, have a look below to see if you can make some fruitful tweaks .

First up, the stuttering that Ed – and, I’m told, several of his vampire mates – experienced on Nvidia hardware. Indeed, testing on a 6GB GTX 1060 (not quite one of the best graphics cards in 2020, but above minimum spec), it was mere minutes into a new playthrough that I met these momentary FPS drops myself. As it turns out, these aren’t specific to GeForce graphics cards either. Guides ed Ollie has apparently been fine on his AMD Radeon card, but when I swapped the GTX 1060 for a Radeon RX 6500 XT, the stutters became both more frequent and more noticeable. This was pumping out higher average frame rates than the GTX 1060 as well, so faster GPUs don’t necessarily provide cushions for big drops.

After a few hours of looking, I’m sad to report that I can find neither a consistent, predicatble cause for V Rising’s FPS stutters, nor a surefire fix. Their appearance is, to the eyes of the beholder, random – meaning you might get none at all, or you might get several in a minute like I did on the RX 6500 XT. Them’s the risks with early access games; at least there’s no better time to bring the issue to the attention of developers Stunlock Studios.

See also  The Chant: next-gen horror from industry veterans is coming this fall

In any event, it won’t hurt to give your non-stuttered FPS a boost, which brings us to V Rising’s graphics settings.

One oddity here is that all three of the presets – High, Medium, and Low – include some level of AMD’s FSR 1.0 upscaling tech. One: wot, no FSR 2.0? Two: this can trip you up if you use the presets alone, as Medium and Low both activate FSR quality settings that make it visibly lower-res than your monitor’s native resolution. And even High makes Ultra Quality FSR the default, so you’ll need to scroll down and manually turn off FSR if you want to run at native.

With all that in mind, my GTX 1060 averaged 57fps at 1080p / Ultra, while installed in a system with a relatively high-spec Intel Core i5-12600K and 16GB of DDR5 RAM. This setup also produced 70fps on Medium and 86fps at Low, and while these speed improvements are largely fueled by FSR quality reductions, there are a fair few individual settings you can change to get V Rising running, building, and exsanguinating a tad more smoothly.

Ambient occlusion: Lowering this from High to Low got me a 62fps average, just under 9% faster than using the High preset as is.

Bloom: Setting this to Low gave a smaller bump up to 60fps, a 5% gain, though that might still be worth taking if your PC is a weakling.

Shadow: This is one you can probably leave on its highest setting, as changing it down to Low only got me a single extra frame per second.

Volumetric Quality: V Rising likes its god rays, bless it, though the Low setting is only a modest visual downgrade. It delivers an extra 5% to average performance, too.

Anti-aliasing: Leave this on the TAA default, as neither FXAA nor SMAA run any faster, and they definitely don’t look any better at 1080p. With that having been said, it would practically be a waste of space to explain that FSR upscaling is disabled when selecting any AA option other than TAA, but I guess I just did.

FSR 1.0: Talk of the devil. At 1440p or 4K this arguably is worth giving a try, provided you keep it on Ultra Quality to preserve sharpness, but at 1080p upscaling in general can be pretty useless. I turned it off entirely and only lost 1fps on average compared to its Ultra Quality settings, and since the settings below that will visible reduce the sharpness of both game objects and the UI, try to go without it if you can.

Depth of Field: I personally prefer the aesthetic of keeping the DoF effect switched on, though turning it off gave a 9% performance boost, so it’s another one to consider cutting.

High quality vegetation: This is the single heaviest setting I tested, producing a 14% increase in performance after being disabled. The visual difference isn’t unnoticeable, but for lower-spec PCs the gains are too good to ignore.

Low Quality Atmosphere: The High preset leaves this setting off; turning it on boosted performance by 7%.

Blood Effects Enabled: I believe this tones down the goriness of certain abilities and interactions, though some of them happen so almost I was squinting to see the difference. Even so, disabling Blood Effects was another 7% performance gain for the GTX 1060.

Cloth Quality: Dropping this from High to Low gives one of the more modest speed boosts, about 5%, though it’s also one of the least noticeable, so I’d still recommend doing so.

Cloth update rate: Likewise, it’s only an extra 5% to performance if you cut this to Low, but most of the time there’s no visible quality difference.

Not that these will help get rid of any stuttering, but for better V Rising performance without relying on the overreaching presets, I’d recommend the following:

Everything else can be left on High, or Medium if you’re just scraping by the minimum specs. Volumetrics Quality, Depth of Field, Low Quality Atmosphere, and Blood Effects are all worth considering for changes too, though the settings above provide a good balance of fidelity and fastness.

Now that you know how to tune its settings, why not make your next stop Ollie’s V Rising beginners guide? It’s full of tips on being the better bloodsucker, and recalling how I spent much of my testing time nursing avoidable injuries and building a hovel so hopeless I was too embarrassed to screenshot it, I absolutely should have given it a read myself.