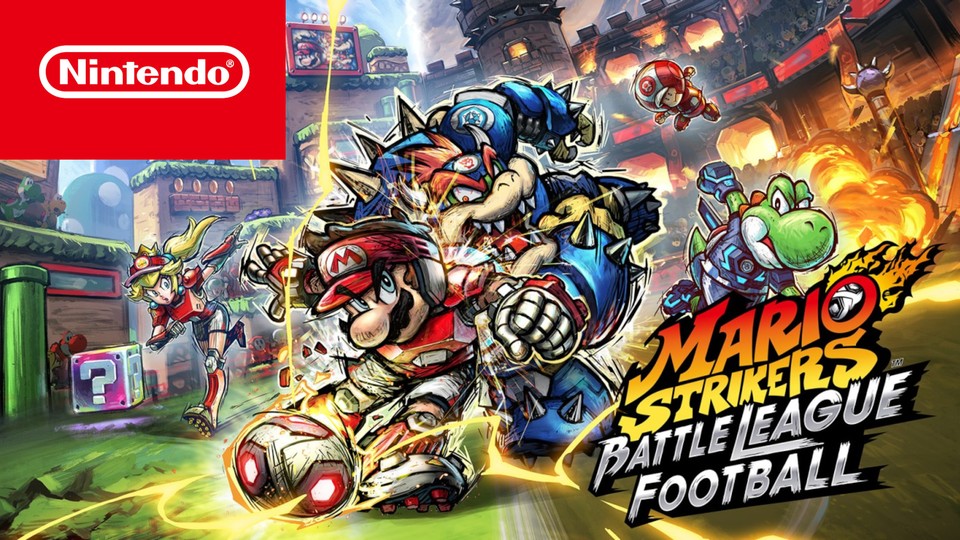 Mario Strikers: Battle League Football will be released on June 10th. With Nintendo Switch Online you can play the arcade football game in multiplayer this weekend.

Arcade football game Mario Strikers: Battle League Football is coming exclusively to Nintendo Switch on June 10th. But with Nintendo Switch Online you can already play it for free in multiplayer on June 4th and 5th, this weekend. However, this is only possible at the fixed times of the event called “First Kick”, namely from 5 a.m. to 6 a.m., from 1 p.m. to 2 p.m. in the afternoon and from 9 p.m. to 10 p.m. in the evening. You can find out more on the Mario Strikers: Battle League Football product page on Nintendo eShop by clicking on the First Kick tab:


On both Saturday and Sunday, you can play Mario Strikers: Battle League Football in multiplayer for one hour during three time slots.

Before the event, you can download the demo from Nintendo eShop and play the Mario Strikers: Battle League Football tutorial to prepare yourself for the exciting multiplayer duels. By the way, you can also compete in a team of two on one console. For participating in the First Kick Event, you will receive a reward of 100 Platinum Points on Nintendo Switch Online.

Fun Soccer Ball with Mario Characters: Released exclusively on Nintendo Switch on June 10th, Mario Strikers: Battle League Football is the third installment in the football game series that focuses on fast-paced matches and spectacular action over realism. In teams of five, characters from the Mario universe compete against each other and not only use effective special shots, but also attack their opponents with aggressive tackles or gain an advantage with items, similar to Mario Kart.

Hyper Strikes & Gear: What is new compared to its predecessors is that you can equip your characters with equipment to improve their values. In addition, there are now so-called Hyper Strikes. These extra powerful shots, which can literally cause a whirlwind on the field (see the trailer above for a glimpse), can be unleashed after collecting a glowing golden ball on the field. If you hit it, you will be awarded two goals.

Even more multiplayer fun: There are also innovations in multiplayer. Up to eight players can now take part in the matches on a single switch console, i.e. four per team. There will be a new club mode in online multiplayer: Up to 20 players can join together in a club and climb the online rankings together.

If you’re not already subscribed to Nintendo Switch Online, now might be a good time to do so. Finally, you get a whole bunch of other extras through the service, which is required for the online multiplayer of almost all Switch games. Among other things, you can play numerous NES and SNES classics as well as the Battle Royale hits Tetris 99 and Pac-Man 99 at no additional cost and save your scores in the cloud.

Nintendo Switch Online costs €3.99 per month or €19.99 per year. A particularly favorable offer is the family membership for €34.99, which up to eight accounts can share. If you want to enjoy even more extras and play N64 and Sega Mega Drive classics, for example, you can also get the subscription including the expansion pack for €39.99 per year (or €69.99 with the family membership). By the way, there is a free 7-day trial period for Nintendo Switch Online. You can find out more here: