man of many talents

Mario is a jack of all trades! There is hardly a name that better describes what Nintendo’s mascot means not only for its mothership from Kyoto, but for half the video game world. Mario’s bouncing adventures became blueprints for entire game genres, two of his many spin-offs established and defined their own subgenres – of course we mean Mario Kart and Mario Party. The once pixelated Springinsfeld even excels on the role-playing stage and has a weakness for physical activity: After serving as a chair umpire at Game Boy tennis, he regularly swung the racquet himself (first on the Virtual Boy). He’s a golf enthusiast, has a history of hitting baseballs, has had his own Sports Mix episode, flew to the basket like an Air Jordan, and even dabbled in horse racing in Mario Sports Superstars. Together with his buddies and the former enemy of the state Sonic, he even made several Olympic Games and even more disciplines unsafe. And of course he has already tried the world’s most popular and, at least in this country, media-dominant sport: king football. On GameCube and Wii there were already 2005 and 2007 rough slides and wild side kicks!

That looks so hot. The staging of the hyper shots deserves the highest rating.

And now, after a 15-year winter break, the lawn rowdies are back: As with the two predecessors, Nintendo is drawing on the expertise of the Canadian studio Next Level Games, who also brought us the technically excellent, playfully successful Luigi’s Mansion 3 for Switch . Given that recent history, we were hopeful for the visual side of Mario Strikers: Battle League Football. And the game didn’t disappoint: the camera pan across the stadium shows a lovingly modeled mushroom head audience, the sporty little rascals themselves are designed to be extremely powerful – never before have Donkey, Bowser, Peach, Toad or Wario looked so vivid in real time and had such great textures. The game itself purrs across the screen in almost always stable 60 frames and 1080p, regardless of whether you kick the leather via the dock or in handheld mode. It gets spectacular when celebrating a goal or the super shots: The first mini-sequences show the player models in close-up, the cheering makers have come up with a few really cute poses and scenes. With the super… sorry, hyper shots, the game always switches to a short anime-style power sequence: Then a color filter and blatant edge drawing are placed over the 3D models – and Yoshi, Waluigi & Co. pack their power so impressively in the shots as you would otherwise only expect from a DragonBall bossfight or Asura’s Wrath. These uninterruptible scenes can annoy impatient kickers, but in terms of staging they are pure force. This is what the gameplay looks like. You always have the entire height of the playing field in view.

What’s happening on the pitch is, unsurprisingly, ruthless action football – with almost no rules, no off-line and no referees. Both teams consist of four field players and a goalkeeper; the latter is always the muscular Koopa boom boom. The other four, on the other hand, are freely selectable characters from the Marioverse. And because there are always two times four of the only ten figures on the pitch, the range of characters soon feels pretty thin. Of course, Nintendo will improve it, probably even for free – but I got bored after a short time given this meager selection. I understand the approach of wanting to have more characters with individual strengths on the field at the same time, but somehow the old Mario Smash Football concept with one star and three “henchmen” had its reasons. In addition, the playing field has been significantly reduced compared to the original: This provides more action and interaction, but reduces the playful options for nice moves and ensures that, for example, hyper shots, which need a certain charging time, can almost only be used against attentive opponents with help of items are possible. 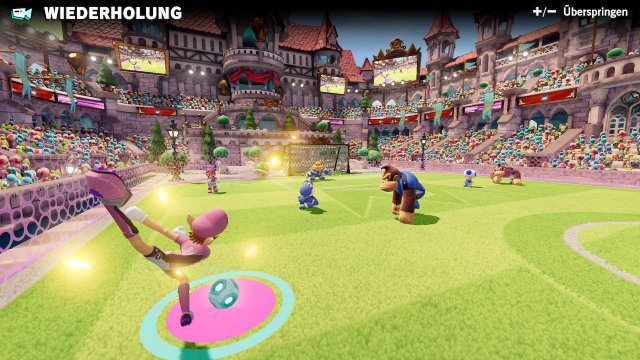 View of the stadium: Depending on the randomly selected perspective, the short repetitions capture your hits well.

Characters walk and run, use low and high passes, can run teammates, break shots, feint, and of course slide tackle. With a normal slide tackle, power matters, Toad vs. Bowser is really bad; in a charged version (including a directional arrow), the mushroom head also brutally smashes the toad king. Professionals try to “foul” their own teammate: This can give this speed boost one on the offensive or push it into an opponent – but this “chain foul” in particular is quite tricky in the heat of the moment. Of course, there are also items, but they are conservative: you run faster with the mushroom, green and red shells work like projectiles, the banana causes opponents to stumble and the bomb makes boom; Stars are only awarded to teams that are just really behind. All items are waiting in question mark boxes, which of course you collect on the lawn – some are available to everyone, color-coded ones can only be picked up by a team.