Almost 30 years of King of Fighters in one book? That works, but it’s not the ultimate story. 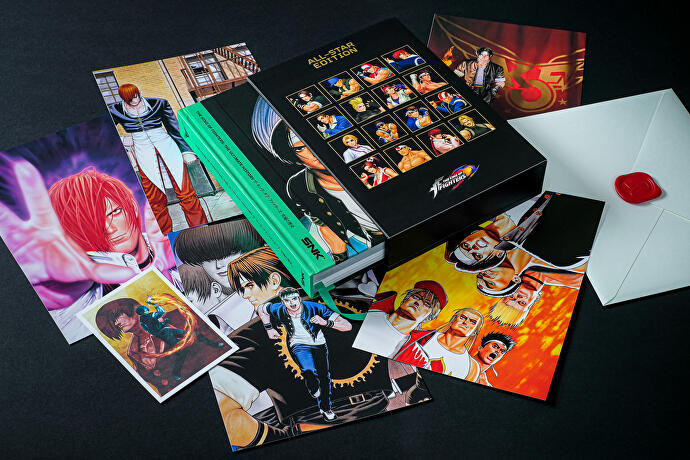 When it comes to sheer size, King of Fighters is second to none. Regardless of the discipline. Since 1994 there have been 24 games, almost 50 fighters, umpteen stages, endless music, it’s a mega franchise in its genre. All the more daring to publish a book called “Ultimate History”. There is so much history here that it should be enough for a whole book series. Well, 544 pages is a lot, let’s take a look.

After the introduction and foreword – Yasuyuki Oda got carried away with a total of four paragraphs – you have 60 pages of mostly text history, followed by 220 pages of pixels from all the games. All games? Well, largely. ’98 Ultimate Impact is acknowledged, as is 2002 Unlimited Match, R1 and R2 are included, but the Maximum Impact series was left out as a spin-off, as was Neowave or the Gameboy Advance editions. Appearances of the characters in other series or Patchinko slots were completely neglected, but that is forgivable given the still enormous mass of games. It then continues with 140 pages of character artwork and another 70 or so for key artwork for each game. 50 pages of interviews close the book, there is no index, but it is not really necessary here either.

I’ve just said something about this elsewhere, mostly to avoid picking on King of Fighters Ultimate History right now. The book is too good to deserve a full fledge now, but yes: like all pixel books, it shows the games as they never looked. CRT screens don’t line up the pixels neatly and so the look plunges into this strange uncanny valley of one’s own memories. It looks familiar, but it’s not what I know…

But okay, let’s look away from that. Each title sometimes gets ten to 16 pages, sometimes only six. It’s a shame, I would have liked to have had another page on the R titles, but hey, the Game Boy look of the Neo Geo Pocket isn’t for everyone (and anyone who has had one knows that it’s never like that here either looked). What’s quickly noticeable as you browse through is that while the games all come into their own back to back, there are few direct comparisons in the development of recurring stages and characters across games and decades.

What is definitely missing is a page showing Robert Garcia or Terry Bogart from 94 to today. The details of what changed, what stayed, what moves came and went. Something like that is completely missing, as well as a page that goes more into the moves and their development with each fighter, how these new mechanics adapt. Instead, in the fighters’ chapter – a double page spread per – there is mostly just a handful of concept art that lists a few elements of the evolution of the characters. Instead, there are 70 pages of mostly well-known key art pictures in the back part. For many of them it’s often enough something that also pops up when searching for “King of Fighters XX Artwork”. One would have liked to have been able to dig deeper, for example Japanese arcade advertising flyers or cabinet artwork are completely missing.

I’m more forgiving with the written word: It begins with an entertainingly told story of the games with many quotes from those responsible. Here, too, you have numerous illustrations, but the text is clearly in the foreground and honestly tries not to be a long version of the Wikipedia article, but to bring you closer to 25 years of beating history in an entertaining and solid flow. I definitely can’t say the same for all books of this type, but here I enjoyed reading this part.

See also  Rumor: Pokemon Legends Arceus is heading for "survival" and becomes the longest game in the series

The same applies to the interviews. In the last section you have about 50 pages of detailed interviews with six developers from the core team of the first games, what they thought at the time, where they wanted to go with the game, what their thoughts are on the development of the series. Developer, planner, composer, it’s a good cross section of the team. The interviews themselves seem a bit hectic and erratic, often ironing out actually exciting topics or practically not answering them. Such a place as dealing with the balancing issues that arose from 94 to 95, where you could then choose your own teams, is acknowledged with a “it took away from the appeal of a team’s character, but it was worth it”. Anyone who has ever interviewed Japanese knows that it is sometimes not easy, sometimes something remains lost in translation or the partner would rather talk about something else and you missed the hints that that was the case.

In terms of pressure and binding, there is absolutely nothing to complain about here. As always, it delivers flawlessly, the colors are strong and the images on a black background have proven their worth. The contrast puts them in the limelight even better.

The Ultimate History of King of Fighters is a little disappointing to be honest. Sure, there are good texts and interviews, the pictures are numerous, but there is also an absurd amount of games and a lot of it was left behind. Still, a few examples would be the direct evolution of the long-running characters in detail rather than just sketched out on some slightly random-feeling concept art. Another point would be marketing material, always a highlight in the retro corner, it looks really bad there. Otherwise you just get what you know. Unnaturally perfect pixels, beautifully processed and sorted, but without going into much detail. Again, the sheer volume of games and years here doesn’t make it easy to go into background details, for example, when you only have a little over a dozen pages for a title like King of Fighters 98.

Die-hard fans will find some interesting lyrics here, but little else that they wouldn’t know in a similar way. Loosely interested retro fans can leaf through in a relaxed manner, which clearly pushes this history into the corner of the coffee table books. As such, it’s definitely a success, it’s always nice enough. But the time when people were happy that books of this kind were published at all is over. And even 500+ pages are not enough to work through such a mass of games in a well-founded manner.