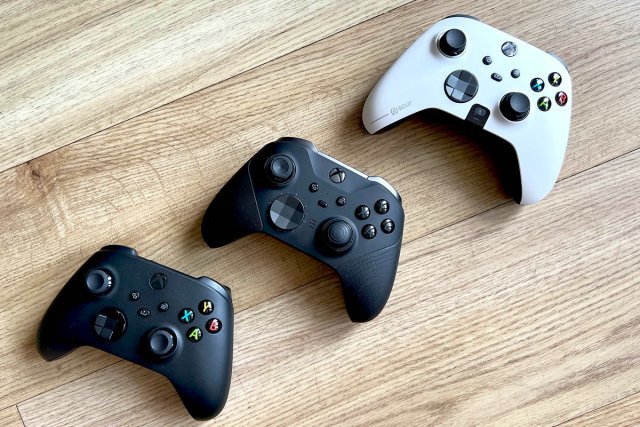 The Microsoft Xbox Elite Wireless Controller Series 2 should be more familiar to the average gamer. It also offers real advantages compared to the Xbox controller that comes with it: additional buttons, interchangeable elements, a huge battery, wireless charging, and a better overall user experience. For me it was love at first click after just a few minutes of play. And the question of whether the hefty price of almost 150 euros is justified is quickly answered. Since then, the Elite 2 has been in daily private use for months. But he’s not perfect either. It will soon become clear why.

Corsair’s Scuf brand is better known to e-athletes and streamers, but also to gaming enthusiasts. Fun Fact: The Microsoft Elite 2 originated in the Cooperation with Scuf. So it’s no wonder that the Scuf Instinct Pro and the Elite 2 are basically very similar – apart from the price difference. But the details make the difference. And as is well known, it depends on them.

Unlike the Elite 2, the grips of the Instinct Pro have a rubberised, non-slip structure on the underside. Even in sweaty battles, it offers an excellent grip, a little better than the Elite 2. The processing quality is on par with Microsoft controllers. Nothing creaks, wobbles or gives way.

See also  How to format an SD card on Mac

But let’s come to the most important point: the controls. Scuf advertises with the improvement of speed and precision. Angry tongues could claim that the paid celebrities from the gaming scene are only too happy to confirm this promise as part of an advertising contract. But what’s the point? We do the test. First of all: Since these are practical tests and not scientific measurement results, a certain subjective impression cannot be ruled out. Nevertheless, we tried to record the findings and differences in videos to make them understandable.

For the test we compared both the Instinct Pro and the Elite 2 in three games:
Rainbow Six Siege (shooters), Elden Ring (action adventure) and Forza 5 (racing game)