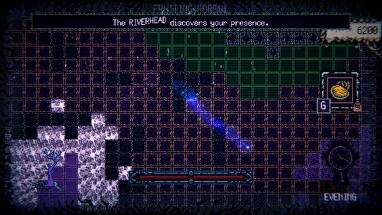 Witch Strandings review
An intriguing and novel take on Hideo Kojima’s Strand ideas, Witch Strandings is a bubbling cauldron of magic and menace about saving or suffocating a haunted forest and its woodland inhabitants.

In the 100 or so hours I’ve spent playing Death Stranding in the last couple of years, I’ve often wondered about the state of Sam Bridges’ limbs. Specifically, the strain they must be under carrying those preposterously high columns of metal cased packages up and down the slopes of post-apocalyptic America. If I were in his hiking boots, I’m not sure all the reinforced skeletons in the world would help me reach the same kind of porter-ing skills as he does gambolling about the place, at least not based on how sore and tired my Dinky little wrists are after a couple of hours of playing Strange Scaffold’s new Strand-type game, Witch Strandings. Yes, that’s right. Someone other than Hideo Kojima has made a so-called Strand-like, and it’s quite possibly the strangest game you’ll play all year.

In fairness, I probably just need to get myself a newer, smoother mouse mat that doesn’t have a raised, fabric trim to constantly rub against my arm. That might sound like a workman blaming her tools, but the fact is, Witch Strandings is a surprisingly physical game that goes all in on the act of swiping, pushing and moving your mouse around to navigate its cursed forest of tiled squares. As you may have read in my interview with studio head Xalavier Nelson Jr last month, Witch Strandings cannot be played with a keyboard or controller. You will occasionally press G to stuff an item you find on the forest floor into your single-slot pouch (once you acquire it, that is), but that’s all. Everything else is controlled entirely through your mouse, from movement to carrying objects and depositing them at their intended location.

See also  Diablo Immortal: Supported Controllers - Which you can play with on iOS, Android and computer

The larger, more forceful your swipes are, for example, the faster you move across the screen. By contrast, giving your mouse just a little nudge and push will see your ball of light move across just a couple of squares, giving you greater control over your movements and making you less likely to hurtle blindly into its lethal thickets of poisonous thorns, quicksand and knotty brambles. It’s a strangely tactile and frictive experience considering there’s no rumble or physical feedback involved, and the way Strange Scaffold have managed to replicate the sensation of pushing against a thick, impenetrable current by sight alone is a remarkable feat of game feel and design.

Fortunately, Witch Strandings is nowhere near as involved or intense as Kojima’s country-wide hiking sim, taking me just three or four hours to see it through to the end credits. As such, depending on your mouse mat of choice, your wrists may well be spared the same kind of mouse mat burn I occasionally rubbed up against while playing this for review. Indeed, if this beach-like had been another 100-hour epic, I fear my wrist would be nothing more than a ragged sliver of bone and mulch by now – a grim, but fitting image, really, considering the state of the forest in which you find yourself in.

Cursed by the titular witch, this foreboding landscape is not a happy place. Mired in all manner of life-sapping obstacles, its resident animal folk are also in need of a bit of TLC. Heather the rabbit is trying to believe in brighter days. Donna is attempting to move on from her ex, Deer, by writing, and I quote, “break-up songs in her head that he’ll never let her sing”. Bahar the owl is just trying to catch up on some sleep. Erik the bear is just doing his best, while Mothman chitters away “in a darkness of his own creation”. The list goes on, and each animal’s state of mind will slowly change and morph each day that you help them.

You don’t have to help these animals if you don’t want to. Heck, you can even put them out of their misery altogether if you wish.

You do this by delivering things to them, matching them with the item that will cure that day’s ills by dragging and dropping it across the map. Sometimes they will be hungry or thirsty, in which case some nice berries or meat will do the trick. Other times they’ll be sick, injured or more worriedly, disturbed, so you might need to find a soft blanket, poultice, medicine or waterskin instead. You’ll find them sprouting, growing and collecting in various areas around the forest, but often in disparate locations to the animal in question. Each day another ailment resurfaces, too, creating a gentle loop of nurture and repairing that goes hand in hand with restoring the forest.

I should mention, you don’t have to help these animals if you don’t want to. Heck, you can even put them out of their misery altogether if you wish – and that extends to the witch herself. You don’t have Sure, you’ll have to apply the same drag and drop techniques to the forest’s cloying miasmic forces in order to find its hermitic witch, blotting out grid squares with clutches of haunted mycelium and gnarled staffs to pierce through its deadly sea of ​​hex and quicksand tiles, but what you choose to do with your forest is ultimately up to you.

For my part, I enjoyed the game’s playful tension between hopeless despair and cautious optimism. At first glance, it does an amazing job to make you feel out of your depth. Its intense purple color scheme, throbbing pink hex zones and menacing black tendrils that wrap ominously around the edge of your screen all point to a doomed lost cause, as does its strange and abrasive top-down interface.

But then you get to know the place, and combined with the enigmatic notes you find strewn around its abstract structures harking back to better days, it all starts to feel like a place worth fighting for. Its hard-edged walls coalesce into the bone white capillaries of an ever-shifting canopy, its wetlands give way to dunes and wastelands, and soon ye’re whistling through its bends and valleys like nobody’s business. This intimidating mass of squares has become a living, breathing place in your head, and while it may not look anything like Death Stranding, you’re going through the same motions. All of Kojima’s key Strand principles have been distilled with deft precision here, with Strange Scaffold recreating Sam’s journey in miniature (albeit 100x weirder) as you conquer the landscape by engaging with it and understanding it. The key difference is that here you have a choice about what to do with that knowledge: save it, or let it rot into obscurity.

It’s worth sticking around in the forest once you’ve actually dealt with the witch, too. Like Death Stranding’s residents, Witch Strandings’ animal folk still need someone to take care of them every day, letting you continually add to your ever-growing point score, but their demeanour and local surroundings also change in tangible, noticeable ways. You start to see the effect your handiwork has had on them more clearly, and the completionist icon-clearer in me does want to see what a completely clean, hex-free forest looks like. So I think I’ll be sticking around a little while longer in this strange, haunted woodland. My wrist might not thank me for it, but I’m sure a soft blanket will cure my aching bones.

Disclosure: Strange Scaffold’s Xalavier Nelson Jr has written for RPS many times in the past.