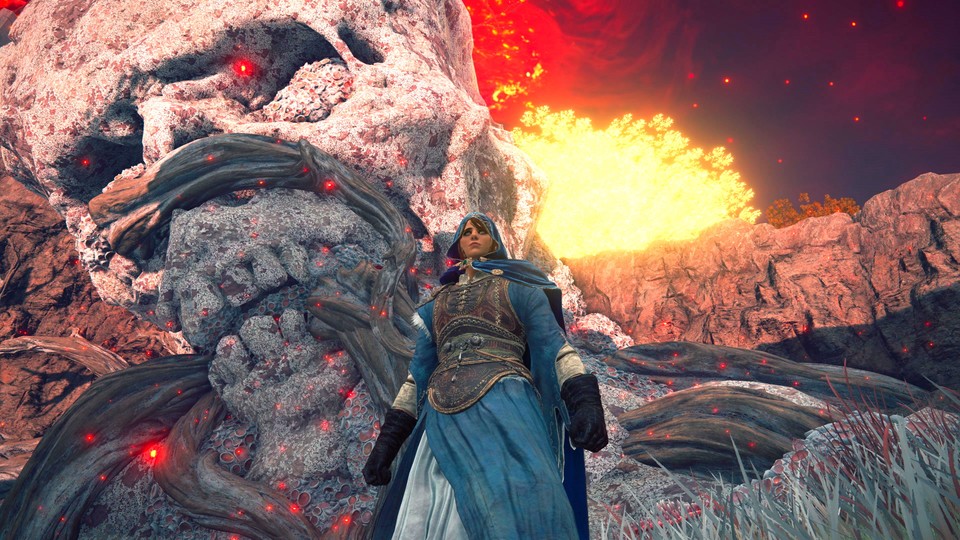 This giant head is located above the wizarding city of Sellia.

Observing Elden Ring players who have spent an hour or two in Caelid are probably wondering what the dead giants are all about. Some appear to be mounds covered in the strange growths of scarlet blight at first glance, but upon closer inspection reveal distinct body shapes like toothed mouths. A face on a rocky slope can be seen particularly well. What killed her and why? A YouTube video deals with the possible backgrounds.

The Fate of the Giants

It’s all about this: The dataminer Sekiro Dubi not only digs into the game files, but also sometimes deals with lore topics about the game on his YouTube channel. The latest video is about the mysterious dead giants in the plagued south-east of the Between Lands.

Who killed the giants, is not difficult for the dataminer to answer. Finally, the old finger reader has a line of crossed out text that reads:

But what is behind it? Sekiro Dubi points to another interesting detail in Caelid. An orphaned giant throne can be found in the wizarding city of Sellia. This is similar to those in the underground, more precisely, in Nokstella and Nokron. Except these aren’t empty. A gigantic corpse is sitting on each of them – so even more dead giants!

You can watch the video here:

The Nox and the Giants: Sekiro Dubi compares the robes of these gigantic corpses with the clothing of the nightmaidens, i.e. clerics of the Nox people that we encounter in the underground cities. It is noticeable that some motifs are similar. If we read the description of the Nightmaiden’s clothing, we learn that the Nox were banished underground because they aroused the wrath of the Higher Will – the otherworldly god who pulls the strings in the Between Lands.

Sekiro Dubi deduces from these connections that the Nox could have aroused the god’s wrath by worshiping the giants as gods. Finally, there is a clear connection through the clothing and in Sellia we meet two Nox at the foot of the orphaned throne. The throne could also indicate worship. The nightmaidens are priestesses, after all.

So what could have happened?

It is conceivable that Radahn preyed on the giants and the Nox in Caelid after they angered the Higher Will. Therefore, the giants may have fled underground with the Nox. The item description also states that the Nox live under a false night sky. Maybe because Radahn, the “Star Scourge”, took the real sky away from them?

This is one of the nightmaidens.

Additionally, Sekiro Dubi notes that while the giants who sit on the thrones in Nokstella and Nokron are tall, they are still too small for their mighty seats. Your feet don’t reach the ground. The Dataminer is therefore considering whether it could possibly be children.

See also  „This is the President“ im ersten Gameplay-Trailer

Caelid isn’t the only place in the game where we encounter dead giants. We can also see gigantic corpses in other places. In addition, gigantic stone heads were discovered, which were deleted from the game before the release. Maybe at some point in development, the giants were planned to play a bigger role in the story, or maybe we’ll learn more about them in a DLC if it’s set in an earlier age.

What do you think of the theory, or how do you interpret the story of the giants? Also, do you think they should play a more important role?