Project Warlock 2 – That’s what I call an increase over the predecessor! 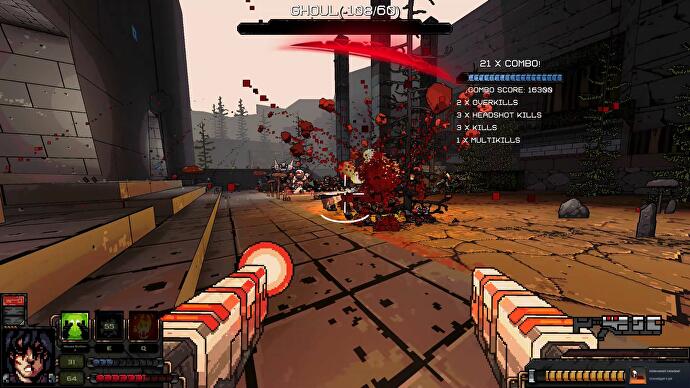 Project Warlock was a nice old-school shooter, but it also ran out of steam pretty quickly. Level design and gameplay à la Wolfenstein 3D just don’t ignite in the same way in 2020 as it did back then. I felt a little sorry for Jakub Cislo, who was just 19 two years ago, because his shooter was technically quite capable. But I am all the more pleased that he has just sent a sequel to Early Access that easily outshines its predecessor in all respects.

If Wolfenstein feels way too dusty this year, you can’t say that about a Doom or even Quake. In any case, I have a lot of fun with old shooters that are mainly based on the latter. And Project Warlock 2 hits exactly this line.

The levels are almost expansive, sometimes over several floors and peppered with nasty surprises. They contain well-hidden secrets and can basically be explored freely. Only red, blue and gold gates have to be opened with the appropriate keys. This is how you divide up the progress yourself – leave armor and first aid for the time being, for example, in order to have urgently needed supplies later.

In this way, for three episodes you move through a pleasantly varied fantasy world, where you are on the road with a different character with your own arsenal and special abilities in each episode. Only the first one is included so far, and thus Palmer, who not only handles a sword, assault rifle and shotgun, but also a grenade launcher and two magical abilities: the short-term freezing of nearby villains and fireballs that make the creatures hit dance and scream.

Shooting and slicing (ammunition can be scarce, so use the powerful sword every now and then!) already feels really good, because the fast movements go hand in hand with the intrusive clusters of enemies. The fact that you can save yourself reloading by switching to a different weapon and back instead gives the Splatterfest an extra boost.

In the case of larger enemy gatherings, you also materialize a second weapon of the current type in order to get air twice as quickly. You can then either wait for the subsequent cooldown or shorten it with tokens dropped by finished fiends. For those who like it sporty: The game rapidly adds up consecutive kills to combos. Headshots and other finesse earn additional points here.

There’s one thing I’m sure about, by the way, that it doesn’t suit everyone. Enemies also appear where you have already cleaned up. In fact, Jakub Cislo and his team arrange these respawns in such a way that they don’t get on my nerves and instead keep the tension high throughout. So they do the experience much more good than they disturb.

Oh, and at certain points you can upgrade one attribute of a weapon at a time. The automatic rifle becomes a laser weapon that fires until it runs out of ammo. The (of course) double-barreled shotgun, on the other hand, gets – of course!! – missed two more runs and still reloads faster, so you can rage even more furiously in the sprite fray.

I could now ask if it still counts today if John Romero plays a game given his blessing, but dare me to swipe and state instead: It’s actually pretty damn cool what Cislo is doing here with his Buckshot studio! Because Project Warlock 2 fits seamlessly into the ranks of the Amid Evils, Ion Furys and whatever they are called. Early Access… of course: sometimes both friend and foe get stuck in walls or small steps. The first level shouldn’t have been so nested. Here and there the program is not finished yet. All in all, it plays excellently, which is why shooter fans with retro ambitions should definitely take a look.