Hunt Showdown Update 1.9 ends the slug meta and makes big strides towards the service game. are you going with me 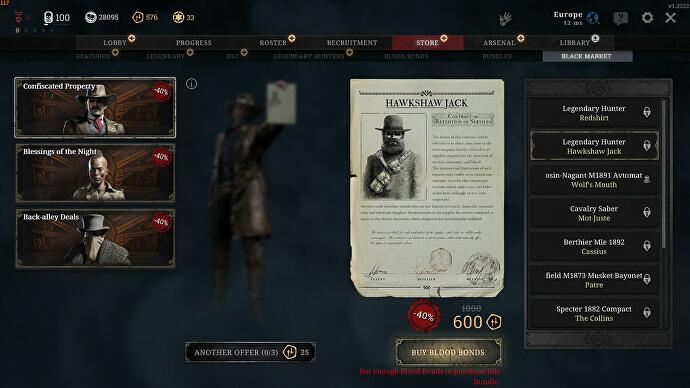 Hunt: Showdown is going through a transformation. Crytek is changing the game more and more in the direction of a service game. Three years after the start of this unrivaled good multiplayer shooter, it’s no wonder: maintaining a complex PvEvP title and providing it with new content ties up massive amounts of developer resources, while at the same time game sales, even with sales, continue to decline.

At some point almost everyone who wanted this game bought it. The audience, which is still growing, will not justify new major leaps in development on its own. That’s why new sources of income are needed and Crytek seems to have localized them: A more stable stream of legendary player avatars and skins for weapons to buy later can be the solution. Efforts in DLC and in-game transactions have increased significantly in recent times. And with version 1.9 there are now three “black market” traders who have a bit Gacha-like changing skins on offer at extremely reasonable prices.

Gacha might be an emotive word here. But basically it’s not that bad, because the black market has so far run completely alongside normal DLC sales and the Legendary Store, where you pay for exactly what you want with premium currency. It works like this: You are offered something from a selected portfolio reduced by 40 percent and if you are not interested and want to try your luck, you pay 25 Blood Bonds (about 25 cents if you buy the smallest and most expensive Blood Bond package). The dealer then re-rolls what he is showing you. This should ensure an immediate snapping reflex.

As someone who has repeatedly purchased one of the extra fancy characters and weapons specifically to support one of my favorite games, I’m not entirely convinced I’ll be using this new feature much. The fact that Crytek hides the black market in its own tab currently ensures that nobody feels bothered by it. It’s actually – and if you don’t have an allergic reaction to this slot machine mechanism – made very elegantly, you can simply ignore it and should at some point make the inevitable jump towards nice-price or even free-to-play easier, if it stays fair.

The question at this point, however, is whether the black market is just another way of getting these skins or whether things may also be offered here that you missed out on, for example, in twitch drop events and that you can’t buy any other way. If Crytek wants to leverage this, it would not be a good idea and players could feel blackmailed into investing money. Let’s hope the people of Frankfurt use a sense of proportion here. Then the fans also support them in the medium-term transition to whatever new form Hunt Showdown decides to take.

At the same time, I have to say that the black market is the last thing I noticed about the new patch. More important are the things that happened playfully. While missing the big poster features, this is quite a bit: the full ones Hunt Showdown Version 1.9 Patch Notes The best way to get it is from the game’s Steam page. But here are the things I found remarkable:

Both the Winfield Centennial and Terminus received a buff to their rate of fire (20 percent and 5 percent, respectively) to make them more attractive – you’re seeing a lot of Centennials sporting Poison ammo now, which was definitely a new (and immensely uncomfortable) feeling . The slug meta has also been heavily counteracted. Firstly, slugs from short shotguns fall off significantly faster in damage than long ones, secondly, you carry less reserve ammo with you, and last but not least, limbs and lower body take significantly less damage from these projectiles. No more fire-and-forget it seems.

Furthermore, the Talon variants of the rifles have finally been significantly changed. Because the way it was back then, nobody liked using the axes and blades embedded in the butt of a rifle. In patch 1.9 you can now swing Talon rifles like a battle ax found in the game world and deal a lot of damage to armoreds or bosses, for example. Perhaps secretly the most important change, because especially when dealing with the Assassin or Scrapbeak, you should be happy to have a Talon weapon with you in the future. Also, you can now swing the Heavy Knife with a heavy attack before the player runs out of breath.

The same applies to saber and machete. In general, Crytek seems to have been very keen to increase the pick rate of certain weapons and tools. For long-term players of such games, this is always an exciting moment and a good reason to reconsider the way you play and the composition of the loadout.

And of course the maps were tinkered with again. The most substantial change concerns the most recent map, DeSalle, where the Kingsnake mine got a new tunnel system to break the dominance of higher positions. It’s also a good move in terms of atmosphere, because the tunnels are impressive and create a claustrophobic feeling. The old map, Stillwater Bayou, has changed again. The infamous pit and basement access now allow for easier rotation and a simpler underground attack path with a ramp and an easier-to-open door. The same thing happened on Lawson Delta, where Salter’s Pork can now also be tunnelled from the east.

Additionally, game ends on DeSalle now spawn at least 110 meters apart. There are various other architectural adjustments, here a ladder to the inside, there a footbridge that didn’t previously bridge a chasm. It’s nice how Crytek keeps its dark PvEvP world alive and changing. Oh, and did I mention you can now smash doors to swing them around and smack them in the face of other players? These then suffer up to 50 HP damage. The players, not the doors.

On the technical side, the main improvements were performance and stability – which I can’t judge on day one of the patch – as well as some audio issues (distant shots underground should now be easier to locate). A new ping limit of 225ms is said to be in the interests of game balance, while both client and server are now said to monitor and track player positions and movements more closely to address recent D-Sync issues. Sounds good at first, the endurance test has to show what it has achieved. Something happens all time.

All in all, not a patch to get excited about, but one that shows, especially in the adjustments to the meta and the maps, that Crytek has good ideas for keeping the game relevant and exciting in the long run. Let’s hope the monetization stays fair and unobtrusive, then Hunt Showdown will have its companions by its side for years to come.