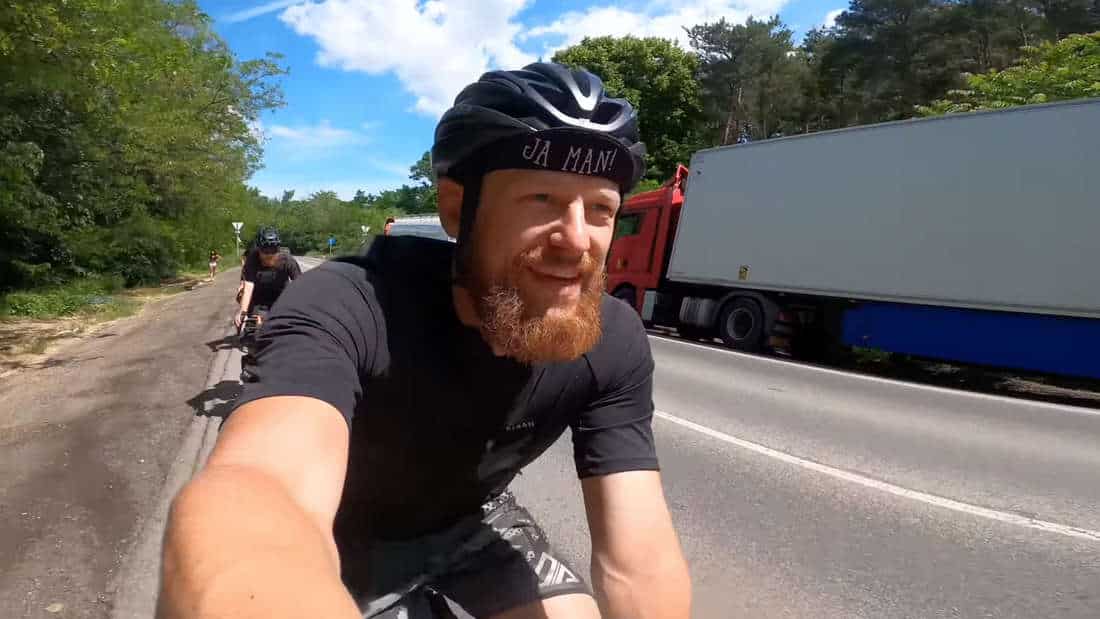 Fritz Meinecke became famous with crazy outdoor adventures on the internet. A dirty saying flies around the ears of the 7 vs. Wild-Star.

Magdeburg – Survival YouTuber Fritz Meinecke usually entertains his fans with exciting adventures. His videos inspire millions of viewers on the topics of survival in the wilderness, environmental protection and animal welfare. In a recent video, however, the influencer is more likely to attract attention with a sexist comment that pisses off the viewer.

Fritz Meinecke kicks off Shitstorm with a sexist comment

What happened? Fritz Meinecke is one of the biggest outdoor YouTubers in Germany. As the creator and participant of the hit series 7 vs. Wild, he has worked his way into many fans’ subscription boxes. He will also be one of the contestants of 7 vs. Wild Season 2. However, until the shooting begins, the YouTuber is passing the time with other projects. A series is currently running on his YouTube channel in which he rides his bike from Berlin to Istanbul with friends.

In episode 3 of this tour, the troupe went from Slovakia to Hungary. A few kilometers after the border, the route led along a busy road. The video shows a woman wearing skimpy clothing walking along the side of the road and holding a cell phone and a cigarette in her hand. Fritz Meinecke films the woman as she drives past – mind you, without making her unrecognizable – and comments a few meters further on: “F*cki, f*cki, 5 euros“.

Clicks at the expense of the woman image: As if that weren’t enough, the woman also makes it into the title picture of the video. Here her face is replaced with an emoji. But the woman is shown to the viewers in close-up from the front and back. It is not clear whether the woman is actually a prostitute. You can find it all here Video by Fritz Meinecke.

See also  TESO: The ESO Live team will show you the Dreadsail Reef raid on Friday

“Witz” by Fritz Meinecke triggers divided reactions – why is the comment problematic?

Here’s how the fans react: As always with such topics, there is a heated debate both on Twitter and under the video by Fritz Meinecke. While some viewers criticize the saying and the cover photo, there are also voices who don’t think the saying is bad because it was only meant as a joke. But the general opinion seems to be: awesome project, ugly gag and clickbait.

This is why this is problematic: The topic is highly controversial. Basically, prostitution is legal in Hungary. The problem: Hungary is a country of origin, transit and destination for women who are trafficked from Eastern Europe into prostitution. And even if the women are not sold as commodities, there can hardly be any talk of voluntariness.

one Report by Deutschlandfunk Kultur according to them, poverty is the main reason why women from Eastern Europe prostitute themselves. Fritz Meinecke’s saying is at the expense of precisely these women and can be understood as trivializing and degrading. Another problem: Fritz Meinecke insinuates that the woman is prostitution, apparently without knowing whether this is even true. The tight outfit seems to be enough reason to sexualize her, to reduce her to her appearance and to catcall, according to the allegations on Twitter.

See also  All the premieres of the week on Netflix: a series arrives with the formula that cannot fail

A viewer thinks: “[…] you don’t have to cancel Fritz for this. Everyone privately makes borderline jokes for the ones on Twitter [auseinandergenommen] would become. But cutting this joke into the video to make the thumbnail and the title spicier at the expense of this woman is just lame.“

In his Instagram stories, Meinecke addressed the situation in the video when a viewer spoke to him about the sexist comment. His answer: “Anyone who finds this sexist and disrespectful is wrong on my channel“. A request for a statement from Fritz Meinecke has so far gone unanswered.