Witch Strandings – Test: How a messed up control almost spoiled the whole game for me 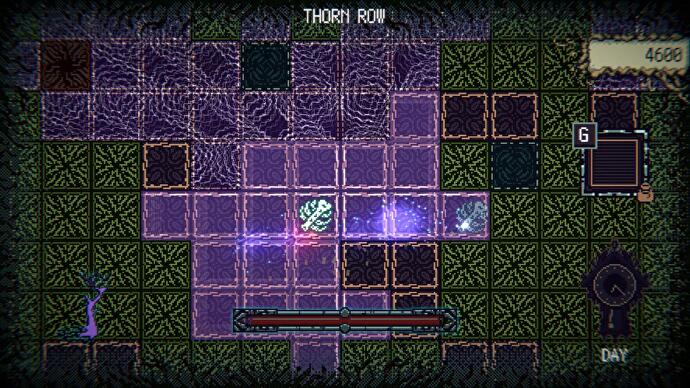 Atmospheric adventure with a social component. Unfortunately, the controls are terrible and the message is a bit too obvious.

I don’t mean that in a bad way, but sometimes developers seem to be frighteningly blind. At least I can’t explain otherwise that you have to constantly push the mouse in all directions like a wounded Duracell rabbit in order to move your alter ego across the field. “You are your mouse pointer” is what it says right at the beginning when you start exploring an enchanted forest as a small light – represented by boxes that all have a specific function.

Some are normal ground, others are quicksand, thorns or impenetrably dense trees and while you can easily cross many fields, others pose dangers that in the worst case can take the life of the light. Through such obstacles one should find a way to the eponymous witch, who made the forest the dark place it is now. So you move the mouse cursor carefully around threatening fields…

… except that you often don’t even see what you’re actually heading for. The image follows the movements of the pointer so slowly that you are constantly moving at the top or bottom edge of the monitor. That’s the only reason I’ve often come into contact with one of the dangerous boxes, whereupon my health drops rapidly to zero. If that happens, you have to move the light very quickly to a field behind it or in the opposite direction, and at the latest this is a downright annoying forearm gymnastics that is supposed to create a connection between the game and the player, but has had the opposite effect on me.

See also  Diablo Immortal: Light the Lamps - How to solve the puzzle in the campaign

So far so bad. Are you still there? Well! After all, there is an uncomplicated solution to the problem that Steam even offers from the house. Simply place the mouse movement on an analog stick of the controller or activate the corresponding preset and Witch Strandings is not a great, but at least an interesting and, above all, properly playable adventure that is not only based on the name, but also thematically on Death Stranding and its structure to remember relationships.

Although this only happens offline, you also encounter lonely characters in the form of various animals that need help in the inhospitable environment. Some of them are sick, others are hungry, injured, or disturbed, so they need berries, health potions, or some other resource to recover from. So you have to find them and then carry them to them – probably the lights that find their way around in the forest. The little game starts all over again every day, which is why the constant care of the residents is a permanent task and last but not least ensures that the heart of the forest is slowly filled with life energy again.

Now you could also ignore this daily routine and concentrate solely on finding the way to the witch. Because this also requires resources at various points, which pave a way through thorn bushes or over quicksand. You also repair fast travel teleporters if you find the tools needed for them. However, if you rush towards the witch with blinkers on, you won’t find all the ends of the story. Especially since there is another, much darker way. However, I didn’t have the heart to go there, although you learn very little about the animals and their world.

Only very short texts serve as a short introduction, like snapshots, and even the central actions of the witch are only touched upon. Most of the background, including the history of the forest, is left to the imagination in Witch Strandings. Due to the clear descriptions and unambiguous motifs, it doesn’t get too much to do, but as an abstract parable it doesn’t work that badly, especially since the background noise and the atmospheric music are pleasantly absorbing.

All in all, the narrative fence post is a bit too obvious and the important social aspect is not really noticeable either narratively or interactively. Apart from walking around and carrying various resources, not much happens. On the other hand, the adventure is only about two hours short anyway, which is why the tight spice suits it quite well. As an unusual parable, Witch Strandings certainly piqued my interest and as such it didn’t leave me disappointed. I just don’t understand what the developers were thinking with the annoying controls – they almost spoiled the fun of this narrative experiment for me. Because you can change them quickly in Steam, it doesn’t really matter in the end. But folks, if you care about relationships and people, think about the players!