the ComicCon 2022 in San Diego is notorious among fans. The most exciting new announcements await us here every year. And even if we don’t get a trailer for every announcement, we still get a wonderful insight into the future of the Marvel Cinematic Universe.

Among other things, the next film of Captain America was revealed. The film will be titled “Captain America: New World Order” wear and character Sam Wilson (Anthony Mackie) at the center of the narrative.

And on top of that he is standing Director of Captain America 4 already determined it will Julius Onahwho at the movies The Cloverfield ParadoxThe Girl Is in Trouble and Luce.

Malcolm Spellman and Dalan Musson are writing the script. They were already working on The Falcon and the Winter Soldier With.

What is Captain America: New World Order about? To the content of the film not much is known at the moment. Possibly plays Sharon Carter a supporting role that as The Power Broker was revealed. She now has her notorious white suit. Her appearance is said to have been confirmed by posters at ComicCon. In this article you will learn everything about the Power Broker: 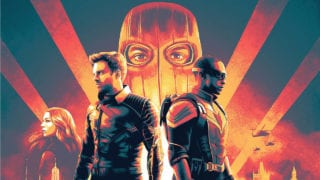 The Falcon and the Winter Soldier: Who is the Power Broker?

Chris Evans was also asked if he would return in the next Captain America movie, but reiterated that Anthony Mackie now carries the shield. This suggests that he is in 4th part not visible is. But maybe it’s enough for one cameo appearance?

In the ComicBook Podcast has Nate MooreMarvel Vice President of Production and Development, revealed that there seem to be real differences between the new film and the old parts:

“I think (Sam) isn’t Steve Rogers and that’s a good thing. To me he’s like Rocky. He will be in an underdog situation. He’s not a super soldier. He’s not a hundred years old. And he doesn’t have Avengers.”

Finally, we are faced with the questions of what it means to be a Captain America:

“I’m saying it doesn’t mean being a super soldier. And I think we’re going to prove that with Mackie as Sam Wilson.”