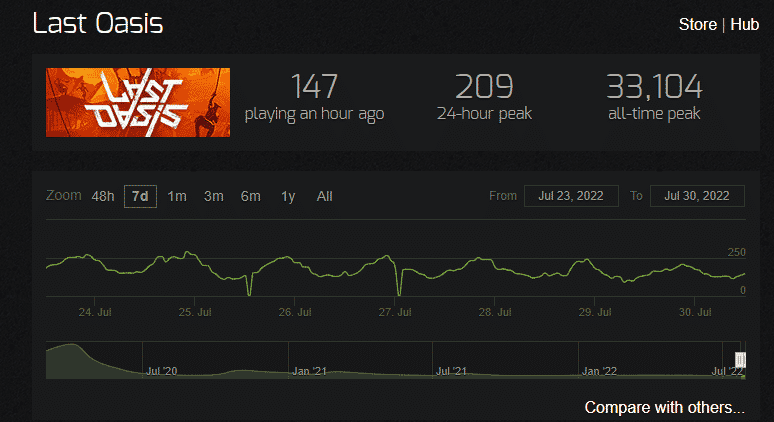 Survival game Last Oasis is struggling to retain its players. Even the developers admit, “Our game isn’t fun”. That should change drastically with the start of Season 5 next week.

This is Last Oasis: The survival game Last Oasis was announced in 2020 and is currently in Early Access on Steam. You are immersed in a post-apocalyptic world where the earth has stopped spinning.

The focus is on survival, which is why Last Oasis offers classic survival mechanics such as hunger, thirst, crafting and open PvP.

The concept attracted many interested players at the start of Early Access, which led to an all-time peak of over 33,000 players on Steam. However, the numbers dropped very quickly and are currently up, according to the statistics page Steamcharts.com with about 200 active players at the same time.

In a July 5 news post, Florain “chadz” Hofreither, one of the developers, talked about how their game is “objectively not fun”. But the team didn’t give up and announced a complete overhaul designed to change that.

Solo gameplay and small groups to the fore

After realizing that the survival game isn’t fun, the team set out to find the root cause of the problem. The result of this will go online in the coming week. The exact date and time will be announced on August 1st.

This is the new update: The update will go live with the start of Last Oasis Season 5 and will be called LOverhaul, a combination of the English words Love and Overhaul.

According to the new blog post by chadz, the focus should be on solo players and smaller groups. The game was balanced based on feedback from Season 5 testers, all of whom were mostly working alone or in small teams.

The LOverhaul update aims to make the world of Last Oasis a whole lot more dangerous, not through open PvP, but through PvE. Originally, the world itself provided no “own” danger, but was “at most an inconvenience.” The danger came solely from other players through PvP. That will change with the update.

Players need to be more careful and think carefully about the risks they want to take. People who run in without preparation and strategy are going to have problems and die. You won’t have fun so chadz.

In this way, PvP should also become more strategic, because players would have to think and assess when it would be worth attacking others.

Do you have to play this version? In the blog post, chadz explains that Last Oasis’ new direction won’t please everyone. The team is aware of this and gives fans of the old version an alternative.

Players who prefer to play the survival game in its original state can do so on private servers. These will remain at Season 4 status.

Are you an active Last Oasis player or did you have a quick look? Will you try the new update? Tell us in the comments.

New survival MMO turns you into a dinosaur, lets you fight for food and partners with 200 players