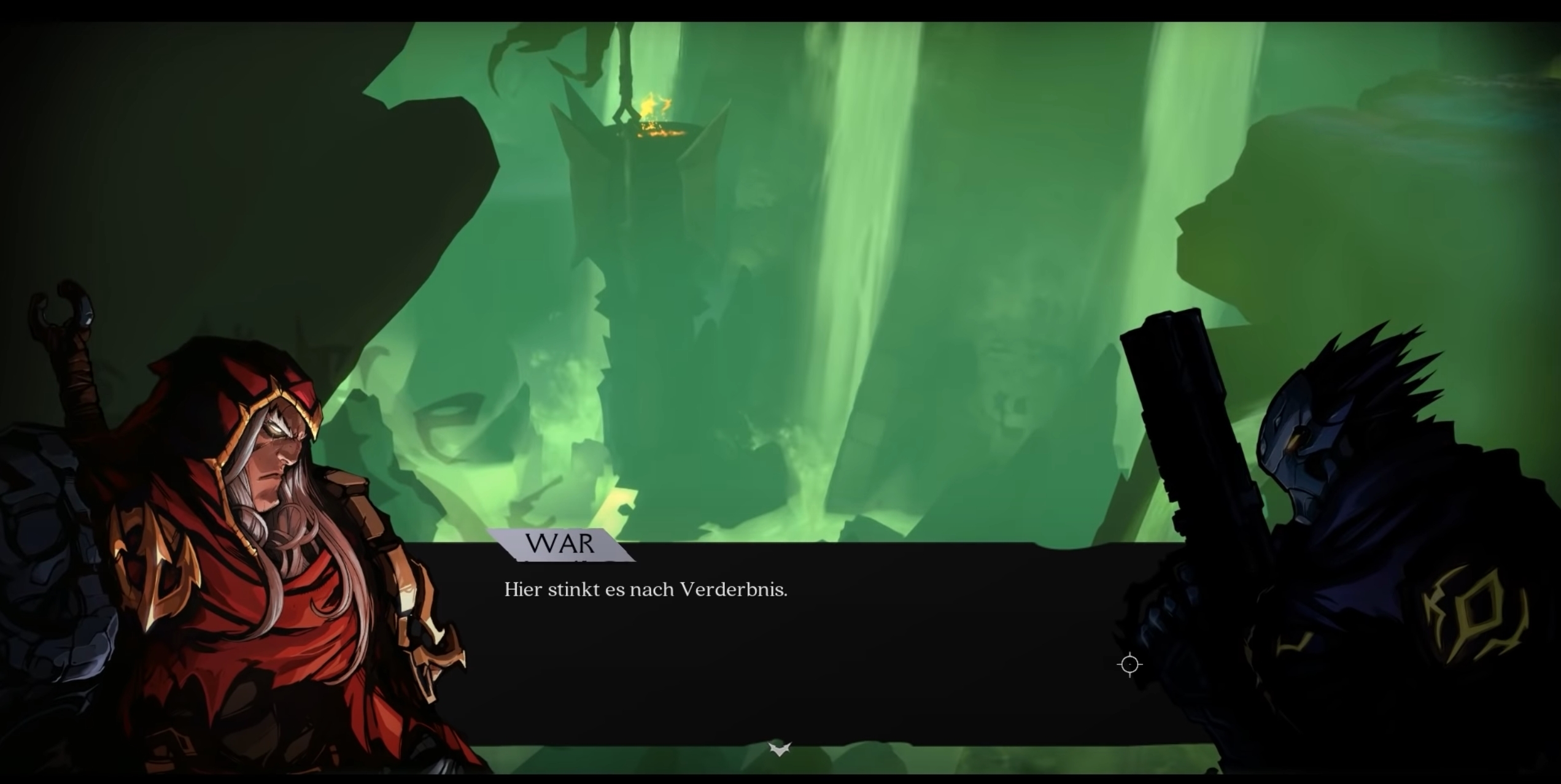 Darksiders Genesis is an iso perspective hack ‘n’ slay game that you can play in co-op with friends. As a horseman of the apocalypse, you travel to hell, where you fight demon lords and try to prevent Lucifer’s sinister plan. The co-op game fell under the table at release and did not receive much attention.

When current releases are rather sluggish, you often look back at the games that you didn’t have on your radar before. For two-player co-op games, it’s worth looking at Darksiders Genesis, an action game by Airship Syndicate that was originally released in December 2019.

The game is part of the long-running Darksiders series, which revolves around the 4 horsemen of the apocalypse. Genesis is an offshoot that plays before the main series and therefore requires no prior knowledge of the story.

In the course of the game, you slip into the role of the two horsemen, War and Strife, who have received an order from their masters, the Fiery Council. You must therefore travel to Hell and prevent a sinister plot hatched by the demon Lucifer.

This is done by first asking the involved demon lords nicely to stop the nonsense. After that, you properly disassemble them into easily transportable pieces because they do not comply with your request.

But the game has a lot more personality of its own than meets the eye. Especially for players who like to play in co-op.

Neither heaven nor hell stand a chance

This is the gameplay: Darksiders Genesis is a classic hack’n’slay game in which you happily slice your way through individual chapters as either War or Strife. The change between the two characters happens fluently directly in the game if both players have agreed. So you don’t have to restart for this.

See also  Twitch bans MMO streamers: "The problem with women is that nobody ever punches them"

The chapters of Genesis take place in different areas, such as swamps, deserts, ice landscapes and fiery fortresses of demon lords. As you explore, you’ll dismantle industrial quantities of demons and corrupted angels that stand in your way. Of course you will also find loot and upgrades and solve puzzles together with your co-op partner.

If you missed an item in one of the chapters or you are missing an upgrade, you can play it again and get the 100%.

Fans of the Darksiders series will also recognize many of the gameplay elements from previous installments. There is again:

War and Strife each have their own sets of abilities that complement each other. War is more of the “middle of life” type, dishing out melee combat. Strife, on the other hand, is a long-range fighter with his pistols and doesn’t really like cuddling.

Both Horsemen of the Apocalypse also have a skill board that they can slot Creature Cores into. These cores are dropped by enemies in the game and give War and Strife special effects in addition to HP and status bonuses.

For example, a core can ensure that monsters drop more rage balls, which are necessary for special attacks. Another core can increase running speed or provide more souls. There are also special boss cores that offer particularly strong effects.

The creature board is very flexible and can be adjusted at any time. For example, if you have found a new core, you can use it directly and try it out. With 11 large and 23 small cores, you can piece together a build that suits your playstyle.

How the co-op works: While you can play through Darksiders Genesis solo, it also has a very in-depth co-op mode. This can take place online as well as in split screen on the couch (even on the PC).

Each player takes on the role of one of the two horsemen of the apocalypse, with the switch between them occurring fluidly directly in the game. Both players just have to agree to the swap and you can try out the other character.

The levels in the game change for the co-op mode. The fights and puzzles are designed for two players, so you get 1.5 games in one. The two players must then work together to solve the puzzles.

The complexity of the puzzles starts with the simple “one holds the gate, the other goes through” and ends with tricky puzzles where you are pressed for time or have to show precision to make certain jumps.

As the game progresses, the puzzles become more and more complex, requiring new tools and skills to solve. For example:

Incidentally, these upgrades ensure that you can play through earlier chapters again and open up new paths to secrets and upgrades.

The puzzles and platforming sections are specifically placed between longer combat passages in which you slaughter hordes of opponents together. They offer variety and are a lot of fun, especially in co-op, when you’re trying to solve the puzzles together or are annoyed because you can’t get the timing right.

The game not particularly long. Depending on the level of difficulty, you will need 15 to 20 hours for the story. Collecting all the upgrades and secrets and completing the optional arena will keep you busy, but will require more grinding.

Genesis’ strength is also its weakness

These are the disadvantages: While the puzzles and climbing passages can be very fun, especially in co-op, they are also one of the sources of frustration in Darksiders Genesis. The iso perspective works most of the time, but not always optimally.

It will happen that you happily fly past your goal when jumping, because the distance to it is difficult to assess from the perspective. This can get annoying and lead to multiple deaths especially when you have to jump diagonally or sideways to hit a small platform or narrow beam.

The controls are also sub-optimal and can feel clunky at times, such as throwing Wars Vorpal Blade. Therefore, be prepared for failure during longer stretches of platforming, even if Genesis’ checkpoints are generous.

You will also pick up one or two bugs from Genesis as you play. Particularly annoying are those where you get stuck in the area and can’t get out. The only thing that helps is to restart the game.

For me, Darksiders Genesis is one of those games that many people completely overlooked when it was released, which I think is a shame. It’s not a full-price title and for the €30 I felt really entertained at the time.

It doesn’t reinvent the wheel and feel strong like previous Darksiders games, but it’s the “simplicity” in its positive sense that I enjoyed so much. Genesis doesn’t have the story depth of The Last of Us or the incredible gameplay variety of It Takes Two, but it doesn’t need to.

The game knows what it’s capable of and what sets it apart from the rest, and it does it well. The slick comic book art style, the funny dialogues, the classic Darksiders gameplay and the great soundtrack by the great Gareth Coker. Everything fits together perfectly and results in a coherent game that is a lot of fun, especially in co-op.

You can sit down with a friend and simply relax and dissect demons or solve puzzles for a few hours. So if you missed this little gem and are looking for a co-op game then I highly recommend it.