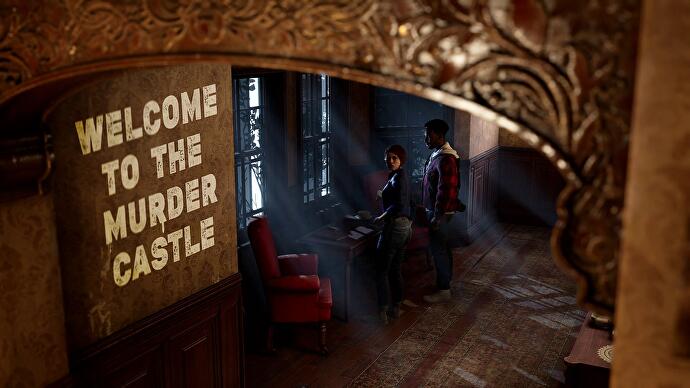 So there it is, the fourth game and the grand finale of the Dark Pictures Anthology. I have to say that what sounded great in theory – a horror anthology with the playful elements of an interactive film like Until Dawn – hasn’t worked so well for me in practice so far. Supermassive’s approach to creating horror only reconciled me last June with The Quarry, which went from trying to semi-historical scary stories back to teen horror.

It’s not easy to point a finger to where exactly the dog was buried for me, because all of these games were very similar in terms of gameplay. The most likely reason is that the Dark Pictures games relied less on the kills and not so much on the question of who will survive this ordeal. They wanted to give the stories a more central role, but they didn’t tell the story grippingly enough and drew their characters too superficially. No, Supermassive has just had a better handle on teen archetypes who are fed up with hormones and do really, really dumb things and then pay for it.

And yet: I have a weakness for spooky stories like this, came out of The Quarry very satisfied and am therefore happy to be there again this time to see where The Devil in Me ends up in my favor. This time it gets even more concretely historical when the supposedly first serial killer in the USA, HH Holmes, becomes the explicit subject of a pop documentary. A production company is scrambling for a second season of its series of serial killer documentaries and wants to end the first installment with a bang. Good thing a millionaire invites the crew to tour a replica of HH Holmes’ ‘Murder Castle’, an old hotel full of trap rooms.

When the crew arrives, some of the contraptions turn out to be more effective than they would have liked. Not a new setup, but not a bad one either, especially if you want to put a wide range of different characters in an awkward situation. So there’s the producer whose company is on the line, the host played by Oscar-nominated Jessie Buckley (Chernobyl, Woman in the Dark), the cinematographer, the lighting technician and the sound engineer, and they’re all very different.

The Devil in Me uses this for the first time for a somewhat more intensive use of classic adventure elements. Because each of them has a unique gadget that allows them to do things that the others can’t do. Boss Charlie uses his business card, for example, to open locks, presenter Kate uses her pencil to make messages that have been pushed through visible on a notepad. The lighting technician Jamie uses her multimeter to rewire electrical systems if necessary, while the sound engineer Erin can use her microphone to pick out noises through walls and Marc uses his camera for resourceful purposes.

Also new is that the characters can now run and climb over obstacles for the first time. In general, there are more ways to get to places that the protagonists of the previous games would never have seen: you balance on beams, cheat your way along narrow ledges, squeeze through narrow gaps or move furniture and other objects. You can even hide. Apparently you won’t feel quite so restricted this time, without the game suddenly degenerating into a real action-adventure.

The narrator, who has been telling the background story since the first part of the Dark Pictures Anthology, is said to have learned “a few new tricks”. Combined with the promise of more than seven hours with The Devil in Me instead of the four to five hours previously, I wonder if we might get a little more and more direct contact with the narrator this time? Is the superordinate narrative level becoming more tangible and direct here?

This time, Supermassive says they’ve not only taken inspiration from Saw and Hostel, but also from The Shining and classic slasher films. And you can see that quite clearly. At the same time, I wasn’t entirely satisfied with the game scene that was demonstrated to us. Exploring an old, ramshackle bath deep in the Murder Castle copy was extremely atmospheric (although I found the perennial “someone scurrying through the frame in the background” moments quite comfortable), but the pivotal scene in which Jamie and Marc Having to choose which of two trapped and suffocating teammates to turn the airflow back on was something I would have preferred not seen without more game context.

It’s the classic, “You can only save one” situation and it was dramaturgically well done, but as long as I have no influence on not possibly saving both – or not letting the colleagues get into this situation in the first place – I can I can also imagine that this moment feels rather unsatisfying. But again: Without context, this is difficult to judge. With the feelings of guilt that result from this, one could also do a lot with the narrative.

Overall I liked what I saw and the promise of more interaction, more puzzles and mazes to figure your way out of makes me curious to see where this is going next. I admit, in the run-up to the presentation, I wasn’t quite sure why an event was urgently needed for the fourth part of an anthology. Especially since such story games are often a thankless object of presentation. But the innovations are strong and comprehensive enough to look forward to the last part of Dark Pictures, which will be released on November 18th, with optimism after the strong The Quarry.