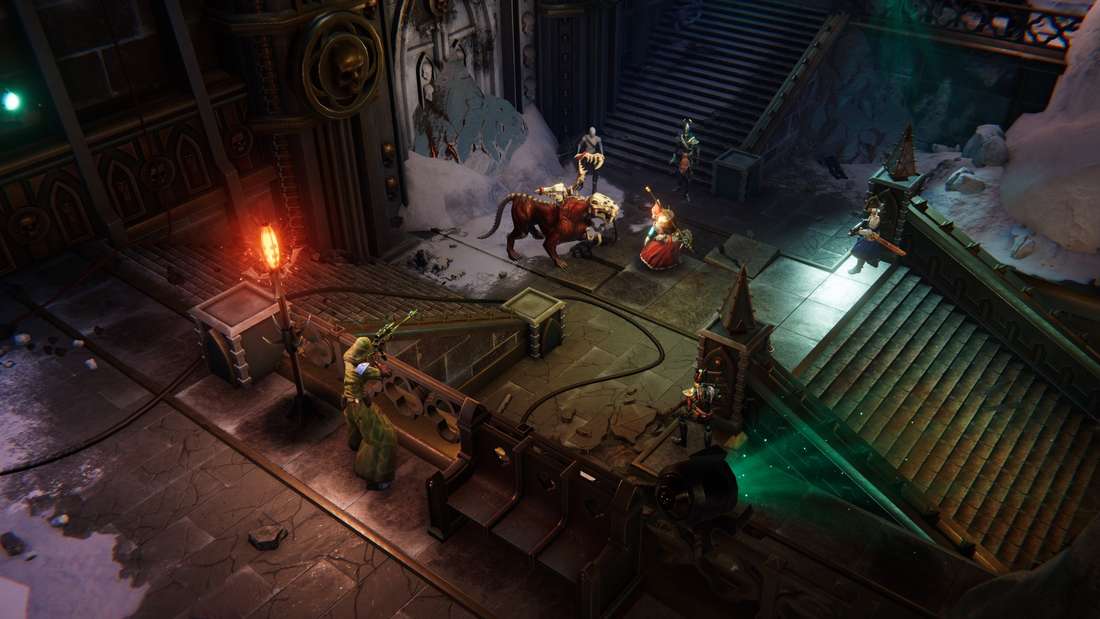 At Gamescom we got a glimpse of Warhammer 40K Rogue Trader. The game could become a real gem for role players – not just for fans.

Cologne, Germany – At Gamescom 2022 Gamescom 2022 we had the chance to check out Warhammer 40,000 Rogue Trader, a role-playing game still in development. And one thing in advance: If you generally like classic RPGs like Pathfinder, tactics or the “Warhammer 40K” universe in general, you should definitely make a note of this title and definitely keep a closer eye on it. Because the game is anything but only interesting for hardcore Warhammer fans and could turn out to be a real insider tip for all role-playing enthusiasts.

Warhammer 40K Rogue Trader: Primarily for RPG fans – but Warhammer is not neglected

Warhammer video games don’t always have it easy. When talking about Warhammer – whether 40K (i.e. SciFi) or fantasy – you often hear “The setting might be really cool, but that’s only for nerds, nobody gets through it anyway”. At the same time, there are also many players who have always wanted a classic RPG in the Warhammer universe.

After seeing the new Warhammer 40K Rogue Trader at Gamescom 2022 and speaking to the developers at Owlcat Games, we’re convinced this upcoming game could make a wide range of gamers happy – from RPG nerds new to Warhammer to to die-hard fans of this dark universe.

What exactly is Warhammer 40K Rogue Trader anyway? Warhammer games can now be found in numerous genres. But with Rogue Trader a novelty is coming our way. Because this is a classic role-playing game in the style of Pathfinder, but with a sci-fi setting, set in the Warhammer 40,000 universe.

Rogue Trader is the first true CRPG with Warhammer 40K in focus, featuring deep character development, a rich story, an isometric perspective, AI companions, and turn-based combat, spiced with some XCOM elements, among other things.

What’s the matter? In Rogue Trader you slip into the role of one of the eponymous free traders (Rogue Traders). He is a descendant of an ancient, powerful dynasty of daring entrepreneurs who rule their own trading empire, explore the galaxy to its furthest reaches and push the limits of the human empire – all with the blessing of the Emperor himself.

You begin your adventure in a treacherous and largely unexplored region of space, discover and visit numerous forgotten or undiscovered worlds (including space hulks, huge spaceships) on your journey with your mighty ship, meet friends, enemies and potential allies, fight for new ones colonies. As you expand your influence, you will have to make many important decisions that can decide the fate of entire worlds. In addition, it is important to prove your tactical instincts and strategic skills again and again.

Who is the game interesting for? In short, for:

The developers emphasize that the game is aimed at Warhammer fans, but by no means only. Players who don’t like Warhammer (tabletop) per se, or are completely unfamiliar with it, will also be able to enjoy and fully immerse themselves in the title, according to Alexander Gusev, Rogue Trader’s creative director. From lore, backgrounds, the setting, the big picture to gameplay mechanics and fights – players are introduced to everything important.

Here you can get a first impression of the game:

When will Warhammer 40K Rogue Trader be released? There is no release date yet and the developers did not want to reveal an approximate period. You don’t want to upset anyone if you promise something and later have to postpone it.

BUT: A closed alpha is to take place this year. After that there will be several beta phases. You can access the tests via Various Founder Packs for Warhammer 40K Rogue Traderwhich you can purchase to support the development of the game.

On which platforms appears Warhammer 40K Rogue Trader? On PC and for consoles. The development for the various platforms runs in parallel. A simultaneous release on all platforms is also planned. But as the developers of Owlcat Games underlined, the release of the PC version will not be artificially held back if there are delays on the consoles.

Here’s what we saw at Gamescom: Unfortunately, we couldn’t do it ourselves, but Alexander Gusev, the creative director of Rogue Trader, showed us the gameplay for almost 45 minutes. And what we saw really looked very promising across the board.

A mission passage was played, in which the main focus was on the combat gameplay. Our main character (the Rogue Trader) and his party, consisting of (up to) 5 other companions, had to face a larger enemy group. In XCOM-style with a grid, cover system (with destructible elements) and hit probabilities, things got pretty serious both in close combat and at a distance.

Each group member has different weapons and special properties (also a kind of Ultimate), which either enable certain tactics in individual combat or benefit other group members. The tactical depth is enormous (as are the character building possibilities). Elevated positions, cover, line of sight, armament – all of this plays a role that should not be underestimated in addition to numerous RPG elements. The round fights already looked very polished and smooth, during the whole session we hadn’t even noticed a stuttering or a bug anywhere – and mind you with a pre-alpha.

Exploration, another mainstay of Warhammer 40K Rogue Trader, also looked really good in the basics we saw. The Grimdark-style environments, effects as well as opponents and your own characters are all visually very successful, all textures are hand-painted, which contributes a lot to the atmosphere.

Something that we unfortunately haven’t been able to see yet, but the developers have already told us and which also sounds very exciting: In the course of the exploration you will not only travel to and see the typical Warhammer theaters of war, but also elements that are related to Warhammer in general didn’t really exist yet. This also includes life away from war – for example in the form of civilians on the streets of the cities, the interior of civilian buildings, etc. So here you get to see a broader world of Warhammer and not just the war zones that are otherwise always the focus.

Conclusion: Are you a Warhammer fan, RPG lover, strategy enthusiast or all in one? Then you should definitely keep an eye on this game and follow its further development closely. Because for us, Warhammer 40K Rogue Trader is one of the most promising CRPG titles that are currently in the works.

The game already cuts a fine figure in the pre-alpha version, offers a great deal of depth in terms of RPG elements such as character building, tactical options and story, and captivates role-playing fans even without prior knowledge of Warhammer to the screen . But if your heart also beats for Warhammer “on the side”, a really big dream should come true for you here (hopefully soon).

Yes, the game is currently still in an early stage of development, but in the course of the presentation and the conversation with the developers of Owlcat Games, the impression was cemented: if something doesn’t go terribly wrong, Warhammer 40K Rogue Trader could be a real one Insider tip pearl for tactics and role-playing fans on the way – especially if you look at the previous Pathfinder parts.