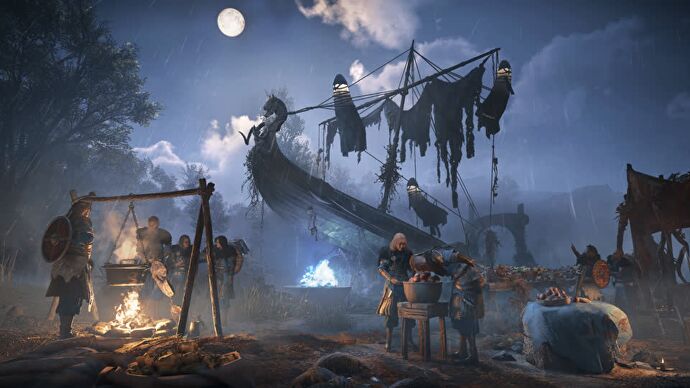 Assassin’s Creed Valhalla might be winding down before the series heads to Baghdad with Mirage next year, but today’s free 1.6.1 update lets your friendly neighborhood viking tackle one last set of puzzle tombs. There’s also a new building that lets you craft runes, along with the usual bug fixes and performance tweaks. The village of Ravensthorpe’s Oskoreia festival returns for one last bash next month too.

Eivor can delve into more tricked out subterranean spaces with the arrival of the second Tombs Of The Fallen pack in this update. The first round of these were added to the game last November, weaving in a bit of Ass Creed’s science-fantasy Isu storyline and characters from ancient British history to boot. Ubisoft say this new batch of tombs is a bit soggy and a smidge melty, thanks to deep water and some pretty dangerous lava you’ll need to contend with.

Some of my favorite parts of games involve going into ancient or abandoned places, or at least areas that are meant to be unoccupied anyway. I enjoyed busting into pyramids in Assassin’s Creed Origins, for instance, and the classic and nu-Lara Tomb Raider series really scratch that itch too, for obvious reasons. I bounced off Valhalla hard though, but I plan on starting it up again at some point to give it another go and tackle these challenge tombs. They’re available whenever you unlock the Ravensthorpe settlement, so that’s handy.

Today’s free update also chucks in a new building for Ravensthorpe, the Rune Forge. If you take gear you’ve gathered here after the village is upgraded to Level 4 then you can turn gear perks into runes in exchange for some silver, or flew them to gain silver instead if you fancy.

The misty Oskoreia festival will be back to shroud Ravensthorpe from October 20th until November 10th, too. You’ll have to guide Eivor in defending the settlement from the Wild Hunt – heard of them – and fend off dodgy spirits.

You can read the full patch notes for the 1.6.1 update here.

Alice Bee rather enjoyed the mythological shenanigans of the game’s final big expansion in her Assassin’s Creed Valhalla: Dawn Of Ragnarök review. “Svartalfheim is less God Of War mythic playground and more Lord Of The Rings low-fantasy epic,” she said. “The place just feels like it’s a world of fertile earth, the dark deeps disgorging amazing things. The grass is very green, the flowers are very blue, and everywhere are huge eruptions of golden rock, forming mountains. Even the trees have guilded trunks.”

Assassin’s Creed Valhalla is on Ubisoft Connect and the Epic Games Store for £50/$60/€60.