Call of Duty: Modern Warfare 2 & Warzone 2: This is new with the Season 1 update

Season 1 of Call of Duty: Modern Warfare 2 is about to start: The activation will take place on November 16th. In a current Blog entry Infinity Ward discusses the new content players can expect with the upcoming update. The published roadmap shows, among other things, that Shoot House is another map that comes into play – fans already know the map from its predecessors. The same applies to shipments, which will be submitted later in the course of the season, presumably in the course of the Mid-season updates on December 14th.

Along with Season 1, the new Battle Pass system and the two weapons BAS-P (SMG) and Victus XMR (Sniper) will go live in Call of Duty: Modern Warfare 2. The M13B (AR) and Chimera (AR) weapons are also announced for the first season. With Klaus and Gaz, new operators are also coming to the first-person shooter over the course of the season. Also confirmed are the raids that will be introduced with the mid-season update. In order to be able to complete these successfully, teamwork and coordination are required. There are also a few smaller puzzles to be solved. This first set of raids Incidentally, at the same time represents a continuation of the single-player campaign of Modern Warfare 2. CDL Moshpit and the co-op mission High Ground, on the other hand, are already available at the start of the season. The update is rounded off by new content in the store, including individual operator bundles.


After the drops at Amazon, Co. on Wednesday, today is also an exciting day. You can buy the PS5 at Conrad & Alternate.

Call of Duty: Modern Warfare 2 – By far the most successful on Playstation


Most of the sales of the new Call of Duty: Modern Warfare 2 will take place on PlayStation consoles, at least in the UK. 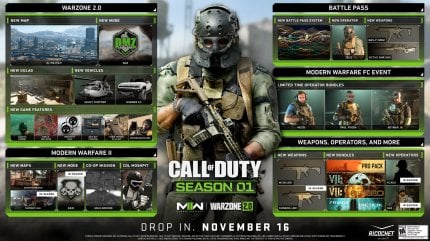 The roadmap for Season 1 in Modern Warfare 2 and Warzone 2.0.

One of the highlights of Season 1 is the start of Call of Duty Warzone 2.0. The focus is on the new map Al Mazrah, according to the developer the largest Warzone map to date. Noticeably different areas and a geographical diversity await players that have never existed in the Battle Royale shooter. “The new map is huge, dynamic and rewarding – and literally built from the ground up,” the developers write. A large metropolitan area awaits you with coastal towns, warehouses, mountains, underground areas, rivers and a complete city to explore – by foot, air and sea. Promised are four player special operations, 6v6 squad battles, ground war operations, battle royales with up to 150 players and more.

With DMZ goes on November 16th also a new game mode in Warzone live. In this extraction mode, you can expect an open game world in which squads complete individual missions or side tasks, search for valuable items – and always fight for survival. The developers want to provide an overview of the new Warzone mode in the next few days.