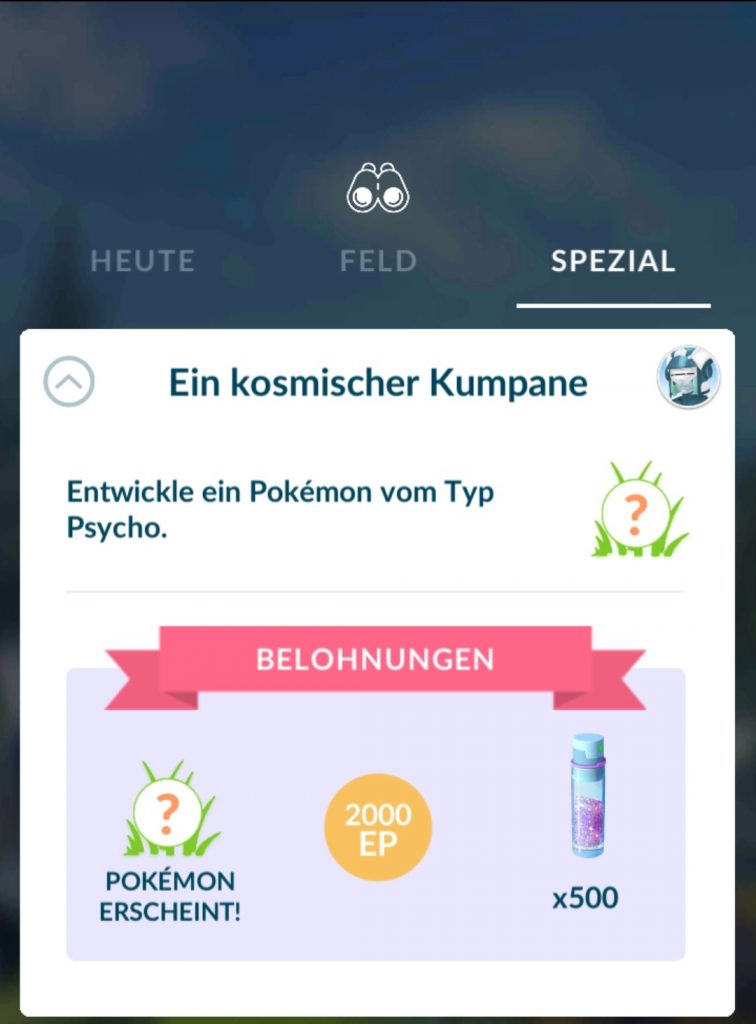 In Pokémon GO, the special research “A cosmic companion” has been active for a few months. Recently, the tasks in which you have to develop Cosmog and Cosmovum caused problems. Now the quests are gone, after many trainers had already designed their Cosmog for it.

What is this task? In chapters 5 and 9 of the special research A cosmic companion, the task awaits you that you should develop your Cosmog and later Cosmovum. At this time, you can own a maximum of one of these copies. That’s why some trainers wanted to wait and prefer to keep their Cosmog and Cosmovum.

But now the tasks have changed and the development is no longer necessary.

Niantic is changing Chapters 5 and 9 of Cosmic Companion

This is new now: The third task in Chapter 5 of Cosmic Companion was “Evolve a Cosmog”. Now all you have to do for the task is evolve any Psychic Pokémon.

In Chapter 9, the only task was “Evolve a Cosmovum”. Now you should simply evolve any Psychic Pokémon for the task. “Evolve a Psychic-type Pokémon” is now the task there.

Pokémon GO: Evolve Solgaleo or Lunala – Who should you choose?

We’ve tried this and can confirm that evolving a Psychic-type Pokémon solves the task. Nevertheless, after solving the task, Rhi tells us: “Un… unbelievable! Cosmovum has evolved!” and how great he thinks it is to witness such a sight.

Why is there the change? In the last few weeks there have been repeated problems with the tasks. In some cases, Cosmog or Cosmovum could not even be developed. In some cases, the development carried out did not count for the research.

See also  FIFA 23: The final part of the series breaks the launch record

Niantic support had to help many players on Twitter who were simply stuck with the tasks. As recently as December 1st, support tweeted that they had resolved the issue with Cosmog and Cosmovum not being able to evolve (via Twitter). Now, on December 3rd, players noticed that research tasks have been adjusted.

What do the trainers say? Some of the players are disappointed as they now had to develop their only cosmog or cosmovum to progress in research and other players don’t have to (via reddit). For example, trainers write, “How can you, after I developed mine!” or “I’m happy I never developed mine. I wanted to wait to get another Cosmog.” Others are not really affected by the change and explain that they only need it for their Pokédex anyway and therefore don’t care that the research has now been changed.

Right now there are no other ways to get a Cosmog other than this research. Accordingly, players deal with their only copy in a thoughtful manner.

But Niantic has already revealed that there will be other ways to get Cosmog in the future.