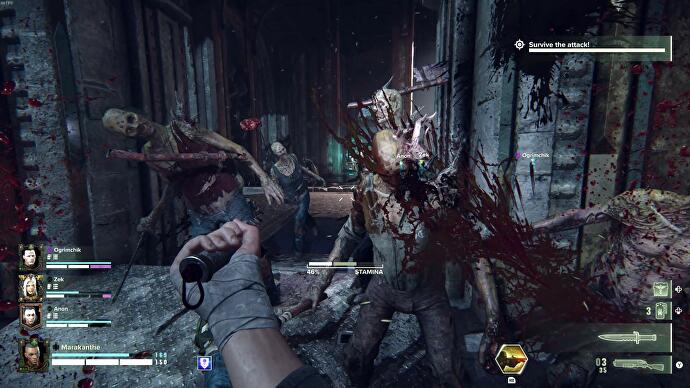 In its current state, Darktide is a strong shooter in a cool scenario that still lacks a lot of content and technical refinements.

Hello Windows desktop! Long time no see. Whereby: The last crash is only one mission ago. But I’m glad that the game now at least keeps up the stakes reliably. At least for me. And in the cutscenes for leveling up, I currently only have a chance of maybe fifty-fifty being thrown out of the program. It was different, that is, worse.

At least I can find my way through the menus with sleepwalking certainty, because after every restart (even if it wasn’t forced) I first have to reset the gamepad controls. Some options are simply not saved. That keeps your fingers fit. Oh, and I can easily get the frame rate below 60, even on a really fast computer. Admittedly, Warhammer 40,000: Darktide usually stays just above the magic limit. But as soon as a few wafts of fog are too much in the backlight…

You are still here! Are you not afraid of technical escapades or are you simply very interested in Darktide? If the latter, then you are like me. I was really looking forward to the spiritual successor to Vermintide 2 – even if I had to lower my expectations long beforehand, because Darktide appears exclusively on Microsoft platforms and has so far only been available for PC. In all likelihood, this is a temporary exclusivity, but don’t nail me down to it without a corresponding, up-to-date announcement from the developers.

Either way, Darktide leaves me with very mixed feelings after the first few days. And it’s not just because of the technical problems. As far as that is concerned, you have to leave the church in the village anyway, because as annoying as some of it is, the Warhammer action is largely playable. It’s actually really great!

Of course, Fatshark isn’t reinventing the wheel started by Left 4 Dead. Here, too, the four of you shoot and slice your way through masses of opponents – this time a threat from chaos and xenos, which rages in the imperial tower city of Tertium and because of which you, as a former prisoner, are sent to the front in order to neutralize certain goals or information in individual missions to catch up Essentially, you run from A to B for about half an hour and try to survive the emergence of huge hordes and strong bosses.

The literally nice thing about it: you do it in some impressive locations. From grimy steel struts protruding from holes in concrete, to gaudy metal walls that stretch a hundred meters in the air, to the finely lit facades of Gothic mansions, Darktide is a feast for the eyes. Add to that the strange creaking, the ominous organ or the meaningful choir in the music of Jesper Kyd – as far as the mood is concerned, I feel very comfortable here.

Now, I was never the biggest fan of the way the knife or ax “swept” through a fog of villains in the spiritual prequels, and little has changed. You don’t experience a gripping one-on-one. Enemy waves act like sets of numbers from which you subtract by swiping. Admittedly, it still feels good when four of you stop a big pack from breaking through a bottleneck. And some weapons split heads with a perfectly satisfying crunch. So it doesn’t bother you in a big way.

What feels even better is that Darktide is much more ranged, which is why fighters of all classes (there are four of them) not only dish out blunt or pointed objects, but also wreak havoc on their opponents with projectiles of all kinds. And what I particularly like about it: The mixture of old-fashioned and at the same time futuristic-looking guns fires almost continuously in single shots, with each bullet leaving its barrel with a full boom.

This gives the whole thing a power that I would not want to be without my sniper’s shotgun anymore. The Ogryn’s fully automatic shotgun, which with its massive stature stands in the way of enemies primarily as a classic damage sponge, also bangs wonderfully. There are also flamethrowers and chainsaw swords for close combat and much more, with which Fatshark very convincingly heaves the principle known from Vermintide into the dark future.

Especially when you set off on higher difficulties with friends or strangers who know how to effectively share tasks instead of rushing through the missions in a constant sprint (you know I mean you, if I mean you!), it’s a sheer joy . Because while there are just four classes, they differ very clearly from each other, so that you usually benefit from setting up a colorful squad and, above all, from positioning them sensibly in combat.

On the one hand, some enemies here also shoot back and quickly cause dangerously large damage, which is why you should take cover every now and then. On the other hand, the shield charges up in different ways for the individual characters: snipers benefit from headshots or, depending on character development, from staying as far away from an enemy as possible, while ogryns charge their shields with heavy blows.

In any case, one of the ways to restore it is to be near a teammate. You always have to keep an eye on the group and their tactical interaction. For example, if haphazard Egoist randoms leave their Ogryn alone in front of a group of onrushers (yes, I’m still looking at you!), they can dance to revive a few seconds later.

That’s one of the reasons why I wish you could tell co-op buddies more than “Need ammo!” or “Let’s go there!” via the ready-made sayings and pings. Just because of the atmosphere: The alter egos chatter with each other automatically, sometimes I would but also like to role-play a little.

The matchmaking comes off without a hitch, because as soon as you activate it, you are immediately assigned to a new group or start with bots, which are then quickly replaced by players moving up. This seamless transition is clever and avoids long waiting times. The fact that you can form a fixed group from the current participants after the mission, if everyone agrees, is just as convenient as searching for players with whom you last fought side by side.

It’s just a pity that there isn’t yet an option to only play with bots if you prefer to explore the levels on your own. That should only be added in an update – a problem that dampens my enthusiasm for the rich action in several places: Darktide is surprisingly unfinished in some places. Not even all the options for customizing your equipment are in the game. Instead, three of the four menu items have the following note: “Coming soon from your trusted dealer”.

I’m also not a big fan of the fact that there isn’t a campaign that the missions are organized into. Instead, progress means gradually unlocking new missions, which are then thrown into the pool, from which the game automatically generates a series of missions, each with one of five difficulty levels.

Now this corresponds exactly to the cycle of constantly scouring through all missions, as it characterizes so many loot shooters. But the mere fact that there is no campaign and instead only loosely placed areas of application makes this activity seem strangely empty. The head just shoots with it; Fatshark may not have thought of that. Even the short film scenes, in which you are told after some milestones how little or how much you mean to the empire, don’t change much.

It’s more about constantly moving out in a permanent fight and fulfilling small tasks without changing the course of the conflict. You buy new gear piece by piece, giving your alter ego a new passive trait every five levels – it’s the stripped-down loop of a modern loot shooter, though with gear customization, one of the most important elements of it isn’t fully there yet is.

In the end, therefore, the question is how well you can cope with the fact that playing just for the sake of playing is so much in the foreground here – because some content is only submitted later and because there is no campaign that suggests narrative progression. That’s why I can’t simply recommend Warhammer 40,000: Darktide in its current form. However, I can imagine that this will change with the planned updates and a long-term support similar to that of Vermintide 2, because the pithy action as the basis of the pithy Warhammer science fiction is already great. The weapons feel pleasantly bulky, while you have to defend yourself against a sheer mass of opponents, strong mini-bosses and often both through well-considered team play. That’s enough for me to keep descending into the depths of Tertium, despite the crashes and other annoying bugs, to banish Chaos and Xenos – at least until the mission shows up in the procedural distribution list again.