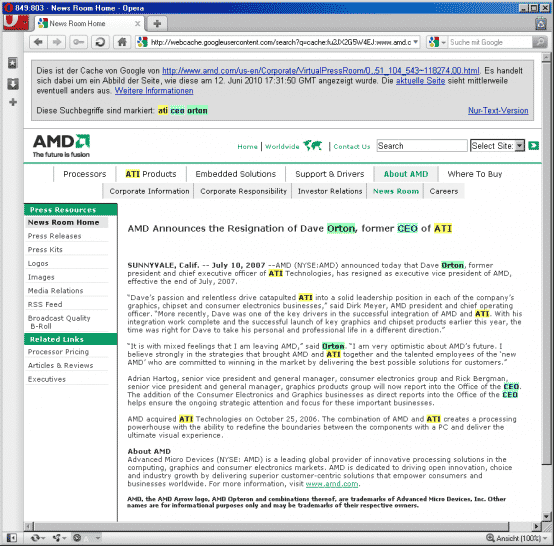 Dave Orton, former Chief Executive Officer of Ati, resigns and the iPhone gets out of jail – that happened on July 10th. Every day, PC Games Hardware dares to take a look back at the young but eventful history of the computer.

… 2007: Today, AMD duly announced in a report to the US Securities and Exchange Commission that former Ati boss Dave Orton is stepping down. Orton served as Vice President of Visual and Media Business following AMD’s acquisition of Atis on October 25, 2006. Before that, Orton was CEO of the Ati company, which also under his leadership (from 2004) bought the punch from the former top dog Nvidia in the DirectX 9 era.

Orton’s previous positions were at such prestigious companies as General Electric and Bell Laboratories before joining SGI. He held several managerial positions there before becoming president of the Art-X developer studio, which was made up of former SGI engineers. Among other things, they designed the “Flipper” graphics chip for Nintendo’s Gamecube, and many of the small design team’s ideas flowed into the Ati architectures starting with the Direct-X 9-capable R300, which made Ati’s breakthrough possible.

Orton himself is quoted as saying he is leaving AMD with mixed feelings but is optimistic about AMD’s future. He believes in the strategies that made the AMD and Ati merger possible and in the talented people who would do anything to conquer the market by providing the best possible products for customers.

… 2007: Less than two weeks after the release of Apple’s Iphone, the first wolves in sheep’s clothing announce that they can circumvent Apple’s restrictions on using custom ringtones or wallpapers on the Iphone – the first jailbreak was perfect.

See also  The Fallout: London mod is bringing nuclear war elephants to the UK in 2023