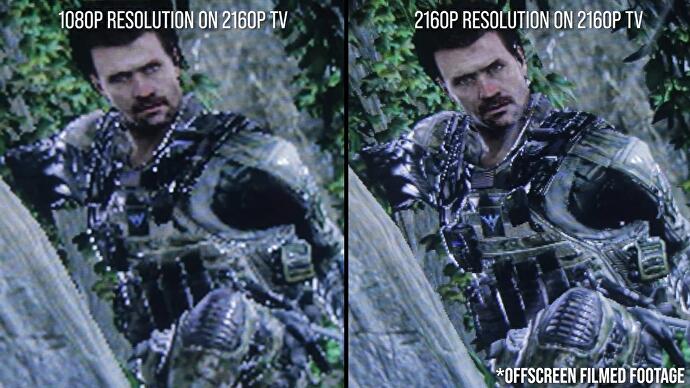 Valve’s Steam Deck is an excellent portable device for 720p gaming that packs the power of a last-gen console into a compact body. The question is: can we go further with the device? With a 4K screen as our target output, we’re going to bring the deck as close to docked home theater gaming as possible. This may seem far-fetched, but new second-generation reconstruction techniques – FSR 2.0 and TSR – have just arrived in commercial games and offer massive performance gains for high-resolution rendering. There is also a large library of older and less technically demanding content that the Steam Deck can accelerate to high resolutions through sheer power. So can we actually get a good docked TV experience with the Steam Deck on a modern 4K display, or are the demands of high-res games just too much for the AMD APU with its low power consumption and low bandwidth?

Of course, you could easily scale 720p to fill a 4K screen, but the results are often unflattering. Games at this resolution tend to look fuzzy and soft, and many TVs don’t have the scaling technology to maintain sharpness. Content with a resolution of 1080p and higher looks better, so we’ll be targeting that resolution here. That’s at least twice as many pixels as the Steam Deck’s internal display. We won’t get true native 4K except for simple titles, but we should still be able to improve the image quality a bit.

First, let’s look at some older and less demanding games. Seventh-gen console titles often do well for this, thanks to lower performance requirements and solid gamepad support. Half-Life 2 is a good example of this, running at 4K 60 fps at maximum settings with no MSAA. Similarly, Deus Ex: Human Revolution clocks in at 1440p60 on medium settings. Image quality is reasonable, performance is solid, and the artwork is holding up well. If you want, you can even choose 4K 30 fps. Valkryia Chronicles and Dishonored are in a similar range at 1440p on default settings, although framerate drops can lead you to opt for 1080p to better hold the 60fps. However, both titles are holding up very well and are even better than their eighth-gen ports, a huge win for the Steam deck. However, other games of a similar vintage fare worse, such as Alan Wake, which requires 900p to hit 60 fps. The Mass Effect Legendary Edition is probably best played on the Steam deck at 1080p30, on par with PS4 and Xbox One, but it’s not ideal for a 4K TV.

The Steam Deck offers tools to boost image quality a little further on a 4K device, most notably AMD’s FSR 1.0 scaling, which provides a small but noticeable improvement in detail over bilinear upscaling without causing excessive aliasing. Modern console games that use AAA also perform well. The Steam Deck is generally able to play at 900p30 with the default graphics settings. These include Horizon: Zero Dawn, Tales of Arise and GRID Legends, although some games, like Dirt 5, are a little harder to handle, so 720p30 is a more appropriate target there. Image quality isn’t great for this type of game on the Steam deck, with most titles running at a resolution similar to their Xbox One versions. FSR 1.0 can help somewhat and generally has a smoother interaction with TAA-like techniques than older, post-process based AA, but it can only do a limited amount here. One point of interest is Final Fantasy 7 Remake, released a few weeks ago, which runs on the Steam Deck with fewer issues than Windows PC users experience.

Finally, and perhaps most interestingly, there are games that use second generation reconstruction techniques and that employ aggressive temporal upsampling to produce more image detail, namely Unreal’s TSR and AMD’s FSR 2.0. God of War features an implementation of AMD’s new upsampling technique, but the results are a bit mixed. Image quality in static or slow-moving areas of the screen is good and looks similar to 1080p, despite rendering internally at less than half the pixels. The downside is that when Kratos no longer covers an on-screen element or moves quickly, the image is riddled with popping artifacts, while artifacts also show up in hair and particle effects. 1080p 30fps is just about doable with FSR 2.0 in Balanced mode, but ultimately I preferred the cleaner rendering of a lower resolution.

Ghostwire: Tokyo is the first game to ship with Epic’s Temporal Super Resolution upsampling technology, but it requires some pretty big compromises in resolution and settings to run well on Steam Deck: 1600×900 output resolution with TSR Performance mode for an internal resolution of 800×450 with low graphics settings elsewhere. The upside, however, is that Ghostwire’s reconstruction works much better than God of War’s reconstruction. Artifacts in motion are kept to a minimum, despite the extremely low internal resolution, without the same artifacts found in FSR 2.0. Static images are also resolved with almost native resolution, although here a quarter of the resolution was reconstructed. Visually, it’s not perfect, but the technology is a real leap in performance, allowing for a huge improvement in framerate over native rendering.

So the results are a bit mixed, at least for these titles. God of War’s FSR 2.0 reconstruction isn’t good enough to really deliver a convincing 1080p picture, while Ghostwire is too demanding to give us 1080p output at all, although its reconstruction is very good. I would have loved to have shown Deathloop as well, but this title has had stability issues on the Steam deck for a long time and currently won’t load past the title screen for me.

Testing the Steam Deck in the dock ran into a few technical issues that severely impacted the experience, although the deck itself is powerful enough to provide a good docking experience across many titles. You need an HDMI 2.0-capable USB-C adapter (for example this one from Satechi) to enable 4K60 as more common HDM 1.4 adapters limit the system to 30Hz output even at lower resolutions. There are workarounds for this by switching to desktop mode and manually changing the display settings, but this is quite annoying and should be addressable in the main SteamOS interface itself.

The gamepad functions are also not well supported. Vibrations do not work as expected on external gamepads, often persisting for many seconds or not triggering at all. Entering text is cumbersome, as many games require the user to invoke a software keyboard, which isn’t well-suited to gamepads. Also, some supposedly controller-friendly games require the use of mouse input to navigate configuration menus, which usually means blindly poking around on the Steam Deck’s touchscreen in the dock.

However, there are regular updates that improve playing in the Dock. Originally, it was not possible to play games in SteamOS Gaming mode with a resolution higher than 1280×800, even with a 1080p or 4K display connected. However, following an update in June, it’s now possible to set the screen resolution to anywhere between 640×400 and 4K, although that applies to both mobile and docked play and may need to be changed depending on the title, which I’m doing for our testing had to.

So, is the Steam Deck capable of delivering a good docked experience? At the moment, docked play with the Steam Deck still leaves a lot to be desired, but not for the reasons one would think. Older titles and less demanding games can easily be scaled to a 4K display. While modern titles don’t fare as well, as they typically require sub-1080p resolutions, FSR 2.0 and TSR show promise for squeezing decent image quality out of advanced titles. We’re still dealing with a system with GPU performance roughly in line with a baseline console of the last generation, but the flexibility of the Steam Deck allows us to tweak the system to achieve the best possible performance. Conveniences like system-level scaling options and framerate caps really help here, even with software that doesn’t run particularly well on the hardware.

The technical problems of SteamOS when playing in the dock are the real problem in my opinion. The operating system is often unresponsive, games can lag, gamepad support is mediocre, and there are a number of configuration issues that need to be addressed. A traditional console or even a decent Windows PC running Steam’s Big Picture mode will provide a better TV gaming experience. It is to be hoped that these issues can be resolved, but for now the Steam Deck is simply far better suited as a purely portable system.