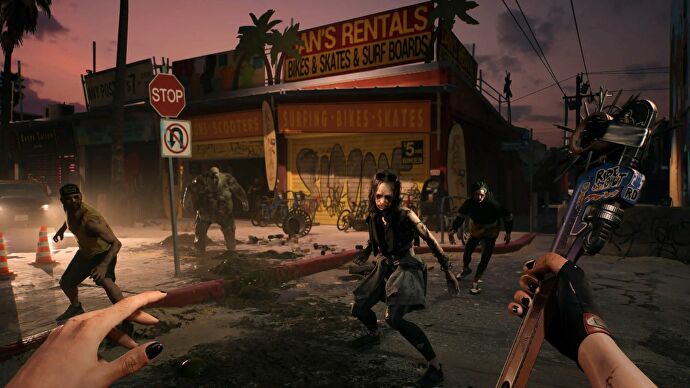 Eight years ago Graham (who used to be to blame for all of this) got hands-on with Dead Island 2, back when the game was being developed by Yager, the folks behind Spec Ops: The Line. Since then, development changed hands like a baton at the Olympic relay; Yager left a year later, to be replaced by Sumo Digital, only for Sumo Digital to leave and be replaced by Dambuster Studios. Usain Bolt hasn’t expressed interest yet, but there’s time.

So going into a 20-minute hands-on with the game in the year 2022, I was a bit apprehensive. What sort of Frankenstinian horror awaited me behind closed doors? But, far from a shambling mess, what I played was a zombie ’em up that seemed close to what Graham saw in 2014, only polished up to a surprising, bloody gloss.

Things kicked off with a brief presentation, where an enthusiastic man in a Dead Island 2 t-shirt gave us the elevator pitch next to a plastic pool of blood, some joke shop fingers, and a striped sun lounger. Combat was described as “visceral”, the main location as “Hell-A”, and there was lots about it being a “thrill” to cut through swathes of the zombie horde. For the demo, a bunch of us journos would be dropped into a mission halfway through the game and do our best level to reach the end, where a demonic, zombified version of Ronald McDonald awaited us.

The level began at night, on the sandy shores of beach in Hell-A (for the avoidance of doubt, it is LA with with undead hordes). Some zombies in bikinis and board shorts stumbled around, doing those husky growls that they normally do. Immediately, I whipped open a radial menu and was met by a donut sprinkled with powerful weapons, both melee and ranged. A fire ax that actually sets folks alight. A big pipe. A pair of electrified claws that stun enemies with a crackle. A sledgehammer. Pistols, assault rifles, a katana.

See also  Overwatch 2 does away with loot boxes... and replaces them with an in-game shop

I charged up a swing with my katana and sank it into an undead surfer. Numbers popped up like the original Dead Island, but it didn’t detract from the heft of the swings, thanks both to satisfying clunk noises and the poor zombie recipient’s reactions. They’ll stumble and twist in time with all your hits, which is a small detail that goes a long way to keeping what is, in the grand scheme of things, still a fairly standard “swingy” combat system, consistently impactful. Of course, this is all dunked in a sea of ​​gratuitous gore, with heads exploding like melons and open limb sockets raining blood, to the extent that it falls on the goofy side, as opposed to like, offensive.

This is all dunked in a sea of ​​gratuitous gore, with heads exploding like melons and open limb sockets raining blood

I steered my character through a dilapidated theme park and followed a marker on my compass to the next objective. This was to restore power to open a locked door, while fending of a horde (natch), and then to clatter my way to a ferris wheel. Here I had to eliminate a tougher crowd replete with a mixture of bloated zombies spitting acid and Hulk smashers with boulder-sized biceps. These were a genuine threat, as spamming the attack button didn’t work. Here I learned to dodge and backstep, causing zombies to tumble over as they missed their strikes and opening them up to a mega-bonk from my sledgehammer on the way down.

As I battered and splattered, I could occasionally unleash Fury Mode, which let me take advantage of the zombie infection inside my character’s bloodstream to go hog wild aka, drop all my weapons and go at them with my bare hands. If that wasn’t available, I’d chuck molotovs and things called bait bombs, which would explode after luring a bunch of them in for a quick sniff of the fake stuff. Throughout the level I also picked up electronic scraps and other bits which I could presumably take to a workbench somewhere and fashion into eg an elemental fire pipe? I certainly wasn’t able to do anything with them from my inventory screen.

Jumping into the other menus briefly brought me into a card-based perk system, which looked like a bunch of slots where you could stick fun, often stat-altering collectible cards into for some delightful playstyle tweakage. You know, things like dismembering zombies giving you a temporary health toot, or setting fire to zombies granting you faster reload speeds.

Right at the end of the demo I faced off against that evil Ronald McDonald, who pounced and leaped away like an undead panther. After a quick scrap, where I’m certain I had Ronald on the ropes, we were told to call it quits as the next procession of journos approached. As with lots of demos at this year’s Gamescom, I couldn’t tell whether the devs chucked us into a fairly linear mission with basic tasks to better give us a taste of the game, or whether the mission represented the main course. I suppose it’s a bit of both, as Dambuster say it’s not an open world game, but a traditional guided tour that’ll take us through iconic slices of LA like Muscle Beach, Santa Monica, and Beverly Hills – a bit more like a Left 4 Dead or Back 4 Blood, perhaps?

But from the brief stint I had with Dead Island 2, I’ve come away surprised that it’s not at all janky given its development history. I’m fairly convinced that it’ll be a fairly fun ride, and perhaps not actually changed an enormous amount from Graham’s first hands-on eight years ago.