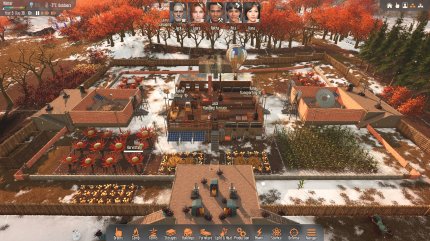 They still exist Game Announcements at Gamescom. With Stranded: Alien Dawn the developer studio works Haemimont Games currently working on a new survival simulation for the personal computer. The team is best known for their work on parts of the Tropico series. Haemimont developed parts three, four and five of the popular series between 2009 and 2014. After the last project, Surviving Mars, played in the vastness of the universe, the ladies and gentlemen are now staying true to themselves and will be launching a survival simulation on a strange planet next year.

All aspects of the game should affect our characters. Regardless of whether hunger, thirst, mentality or weather – everything matters and changes our gaming experience. The focus is on survival as well crafting, base building and discovery. In addition, comes in the fights a little strategy to, but not as extensive as with Surviving Mars. After the half-hour gameplay presentation, we had the opportunity at Gamescom to get additional information from the developers in an interview. Of course we don’t want to withhold that from you either.

Stranded: Alien Dawn in the Gamescom preview: A survival simulation in an alien world (4)

First we exhibit 30 playable characters a squad of four together. Each character has different strengths and weaknesses. These can be classic skills such as greater resistance to hunger and thirst, or the ability to spur on other group members by writing documents. In addition, all characters have skills like crafting and research that we have to manage and improve as the game progresses.

After selecting the team, the actual game begins. Our squad is stranded with the spaceship on a strange planet and from then on fights against creatures, external circumstances and diseases for survival. It is essential that the foursome help each other. Certain characters are more resilient, others are better trained in combat, and still others can be used as a kind of medic.

But that’s not all: All events change our characters. For example, in winter we need more clothes, otherwise the characters will start to freeze. Additionally, once someone has been injured, the person may develop a fever and their state of mind may change for the worse. Should even one person die in a run, the fact pulls down the entire team. So we really have to be careful if we want to survive.

In between, individual team members leave expeditions send. For novel raw materials we should do such tours regularly. By researching strange things, we also always discover something useful. But such excursions are always associated with dangers. Of course, when a character explores alone, it makes them more vulnerable to the evil creatures.