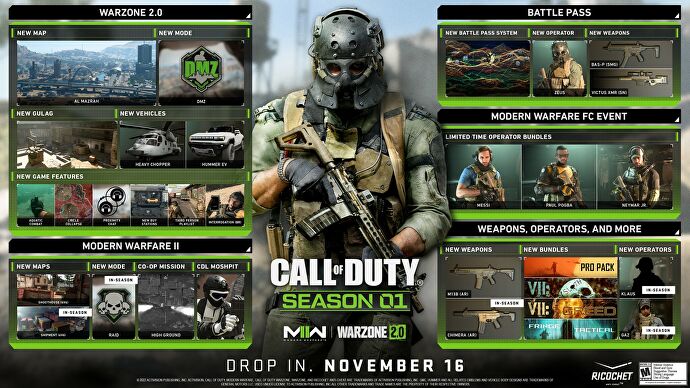 Activision have laid out their Season 1 roadmap for Call Of Duty: Modern Warfare 2 along with the upcoming Warzone 2.0, which launches on November 16th. As that’s less than a week away now, it’s a good job there’s loads of info about everything, from the game’s battle pass overhaul to the incoming story-based DMZ extraction mode. Have a read to get yourself ready to head to Al Mazrah next week.

The new battle pass is map-based, instead of being the usual linear tier stream like most live-service games. Maps are split into sectors, and are themed with seasonal updates. You’ll earn Battle Token Tier Skips to unlock items and other sectors next to ones you’ve already claimed, with five items in each sector and at least 20 sectors on a map. The idea behind the new battle pass is that you’ll have a little more freedom to unlock weapons and skins at your own pace by choosing the sectors you want to focus on.

DMZ mode arrives with Warzone 2.0, and it’s an “open-world, narrative-focused” take on COD’s multiplayer. Operator squads can tackle fact-based missions however they see fit, which I assume will be with extreme prejudice and lots of shootybangs. DMZ offers side objectives to complete too, and Activision are promising more details closer to launch. There’s loads more info on what’s coming in the full Modern Warfare 2 and Warzone 2.0 Season 1 roadmap here. Pop the kettle on before you start reading, it’s a long ‘un.

Ed’s had a blast playing the latest Call Of Duty for his Modern Warfare 2 multiplayer review – sans Warzone 2.0, obvs. Just don’t mention the arcane weapon unlock system. “Sure, it encourages experimentation and ensures players must experience everything in the game’s arsenal,” he said, “yet in doing so, it exacerbates the feeling of weakness that comes with lifting a naked weapon for the umpteenth time.”

Call Of Duty: Modern Warfare 2 is out now on Steam other Battle.net for £60/$70/€70. Warzone 2.0 launches November 16th. Check out Hayden’s guide to Modern Warfare 2’s best guns while you’re waiting.